My Journey Into Warhammer 40k, Again: A History

1992, Atlanta: A ten-or-eleven-year-old Zack is riding in the back seat of his father’s Mustang on the way to Space Camp. Clutched in his hands is an issue of Inquest Magazine, the fresh plastic wrapper discarded into the floorboard, the obligatory promo card for a CCG that would never make it a year tossed aside. The pages fly by: updates on a possible Wildstorm CCG, how the upcoming Ice Age expansion would introduce new mechanics for Magic: The Gathering (including the forever-popular cumulative upkeep), and plenty of Star Wars TCG coverages. But one article stays open a lot longer than the rest, enduring almost the first hour of the drive: a game called Warhammer 40k.

That was it for me. Those pictures of Valhallan Ice Guard, valiantly holding back a wave of Orks, was more than just a bunch of painted toys arranged on some scenery. It was a glorious battleground, packed with individual stories and tense moments. As soon as I could, I found a box of those same warriors at a comic shop wedged between my grandmother’s hair salon and a travel agency. I also, for some reason unknown to 34-year-old-Zack, wanted a guy on a horse and some hobbits with sniper rifles. In what I’ll always remember as an unquestionably kind act, the owner of the store gave me his rule book and a box of five plastic Chaos Marines, plus a metal dark wizard (some Ahriman guy, probably didn’t stick around or anything). He also told me that when I had them all built and painted, he would be glad to teach me how to play the game, and told me I should see if any of my friends wanted to learn as well.

By the time I convinced my grandmother to take me to the store, it was nothing but an empty front with a number for rental inquiries. Wherever you are and whoever you were, thank you, Comic Store Guy. 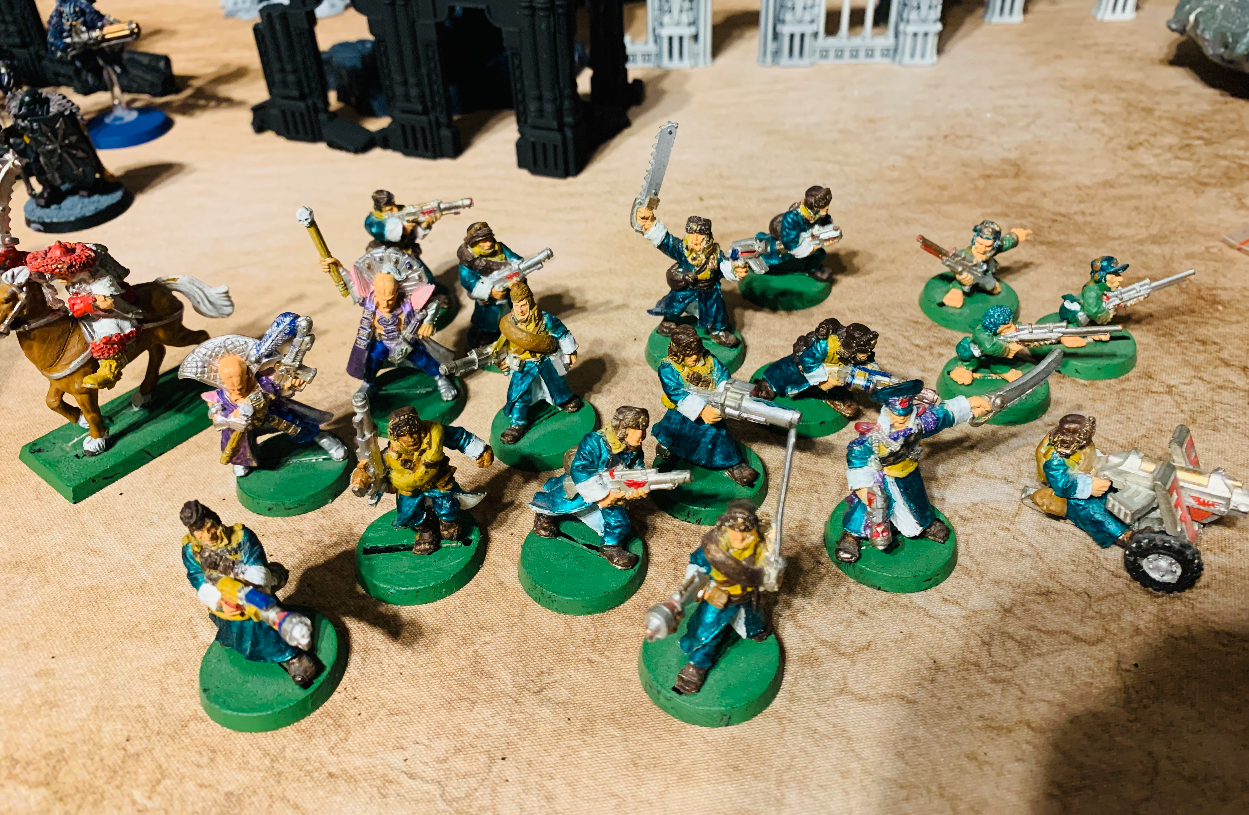 The next experience I had with 40k was much more telling of the problems that have dragged this hobby down for literally decades. Upon finding another game shop closer to my house, I worked up the courage to bring my painted models to their tables one day, and asked the employee at that section how I could get to play a game. I told him I hadn’t played one yet, but I did have the rules and had read through them enough that I felt like I could do ok. I was actively playing Magic and Star Wars TCG a lot at that point, so learning game mechanics wasn’t too much of a challenge. He took a look at my little collection and immediately told me that not only would they not allow unfinished models to be used at their shop, they weren’t there to teach kids how to play. Crushed, my minis went in a box in my parents’ basement, where they stayed until my thirties.

(That shop also closed down within a year. With customer service like that I can’t imagine why.)

Thats not to say I didn’t get into the hobby in a different way. A few years later, I discovered the fun of Dungeons and Dragons, and when my friends started talking about using Warhammer figures as their characters I felt that pull again. I played a dwarf, and as I couldn’t find one by himself, I bought a box of ten. The next thing I knew, I had a cannon, some Slayers, and a few friends learning how to play Warhammer Fantasy alongside me. We probably mangled every rule and always skipped the ones that were too obtuse to be fun, but we had a hoot. Every once in a while the 40k adults would get to the store first, and spend the entire day yelling at each other over firing angles and blast markers until, invariably, one player quit and the other insistently claimed victory. As they made little to no purchases and generally brought the atmosphere of the shop down (not to mention the profanity, loudly shouted in a game store that also sold LEGO and Beanie Babies) the owner would often encourage us to use the table and terrain for our games, and even joined in a few times with his huge collection of Orcs and Goblins. We never knew what was going and I cant say I ever ‘won’ a single game, but we had a blast.

Thinking back, it must have infuriated them to see the table cluttered with dragons, rat men, and dwarves as the lot of us basically ignored half of the rulebook in favor of ridiculous voice acting for our favorite minis. How dare we play with our toys in a fun way, right?

I fell out of the hobby sometime around high school, where many (girls) more (girls) interesting (girls) things caught my attention (Sony Playstation). The dwarves went into the box with the others, where they would swap war stories until one day when my friend David said “Hey, we should play Warhammer”. 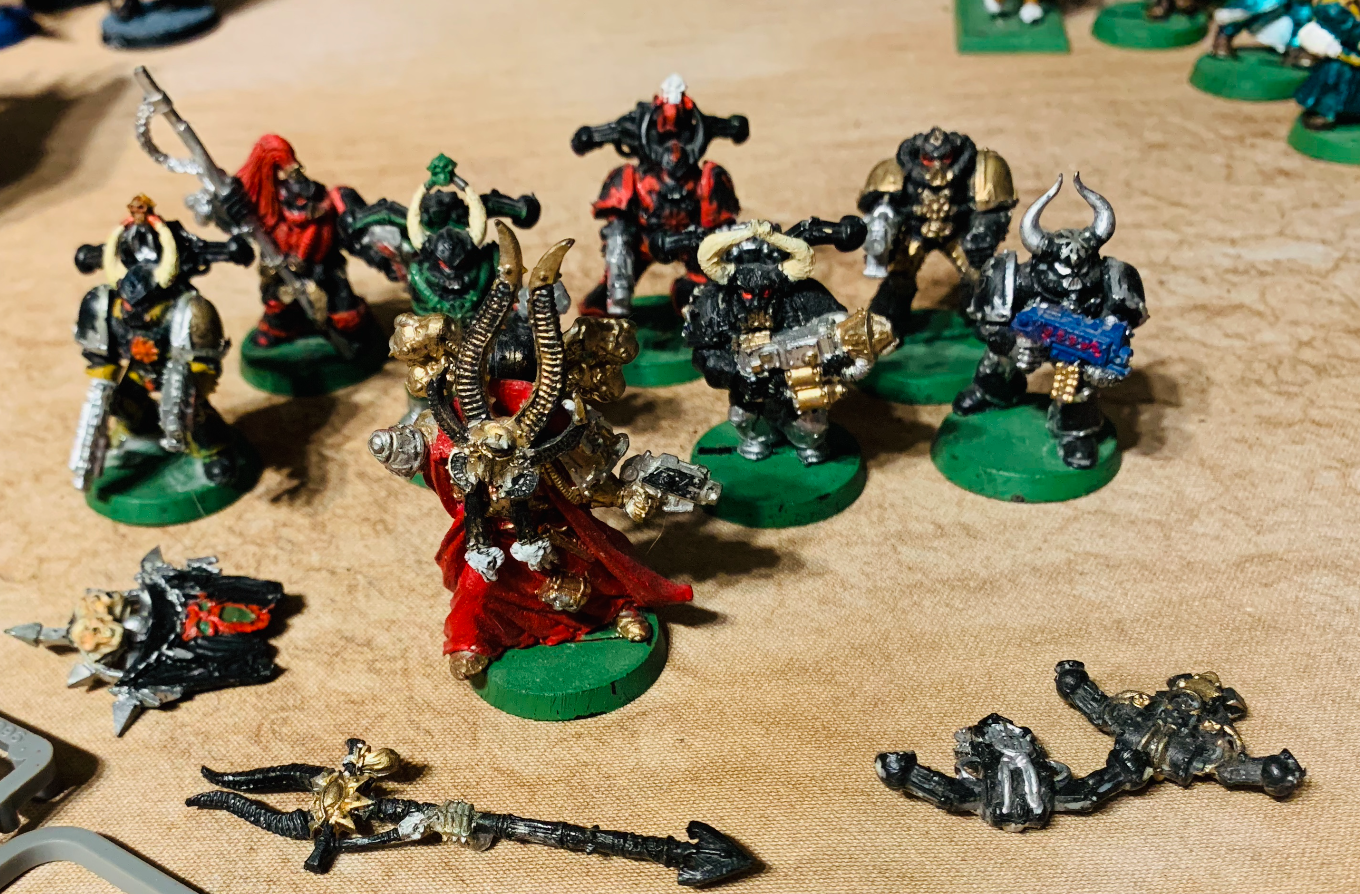 Turns out, there was some big release that year, something called The Age of Sigmar.  Before long, I was trying to assemble Arkhan the Black, dreaming of waves of skeletal warriors marching forward in the implacable tide of death. Many a game of Floorhammer was played incorrectly as we grew to learn the rules (explain the battle shock mechanic to someone who doesn’t play the game and see what shape their face makes) but the important thing was, we were having fun. Eventually, at the advice of a few friends, we took our armies to Giga-Bites, a local game store. I’ll be the first to admit, the notion of playing in public was immediately off-putting. Though I hadn’t played Warhammer in years, I’d been around plenty of ‘that rule doesn’t do that yes it does’ arguments while trying perusing the shelves of various other game stores. I absolutely did not want the joy of my rediscovered hobby to be shat upon my grognards, to be blunt.

Thankfully, that wasn’t the case at all. Not only was the overall AoS community fairly chill and supportive, there were people playing for more reasons than  just Win At All Costs, and more than glad to talk about their forces and what they did. My circle of friends that played grew from two, to six, and then to an entire league. I even went to a few tournaments (I am not a competitive player by nature, so this was a step for me as well) and had fun playing against people from all over the world. Whatever awful gatekeeping the hobby has was likely still around, but it was being pushed out steadily by people just having fun. Which is, ultimately, the point of a game.

…crap, this was supposed to be a post about what army we picked and why, right?

I picked Adaptus Mechanicus, and next week, I’ll explain why I love toasters.