Nothing feels quite as satisfying as wrapping up an entire unit, plus a hero!

It may have taken about a week longer than I planned, but I finally finished my first 40k unit: a pack of 10 Vanguard! Technically, there are eleven little robot men here, but thats because I used the extra bits from the Disintegrator kit to build an additional special weapon guy. As I’ve yet to play the game, I didn’t want to miss out on a cool option, so now I have enough to swap out when the unit hits the board. So not only did I meet my challenge, I marginally exceeded it. 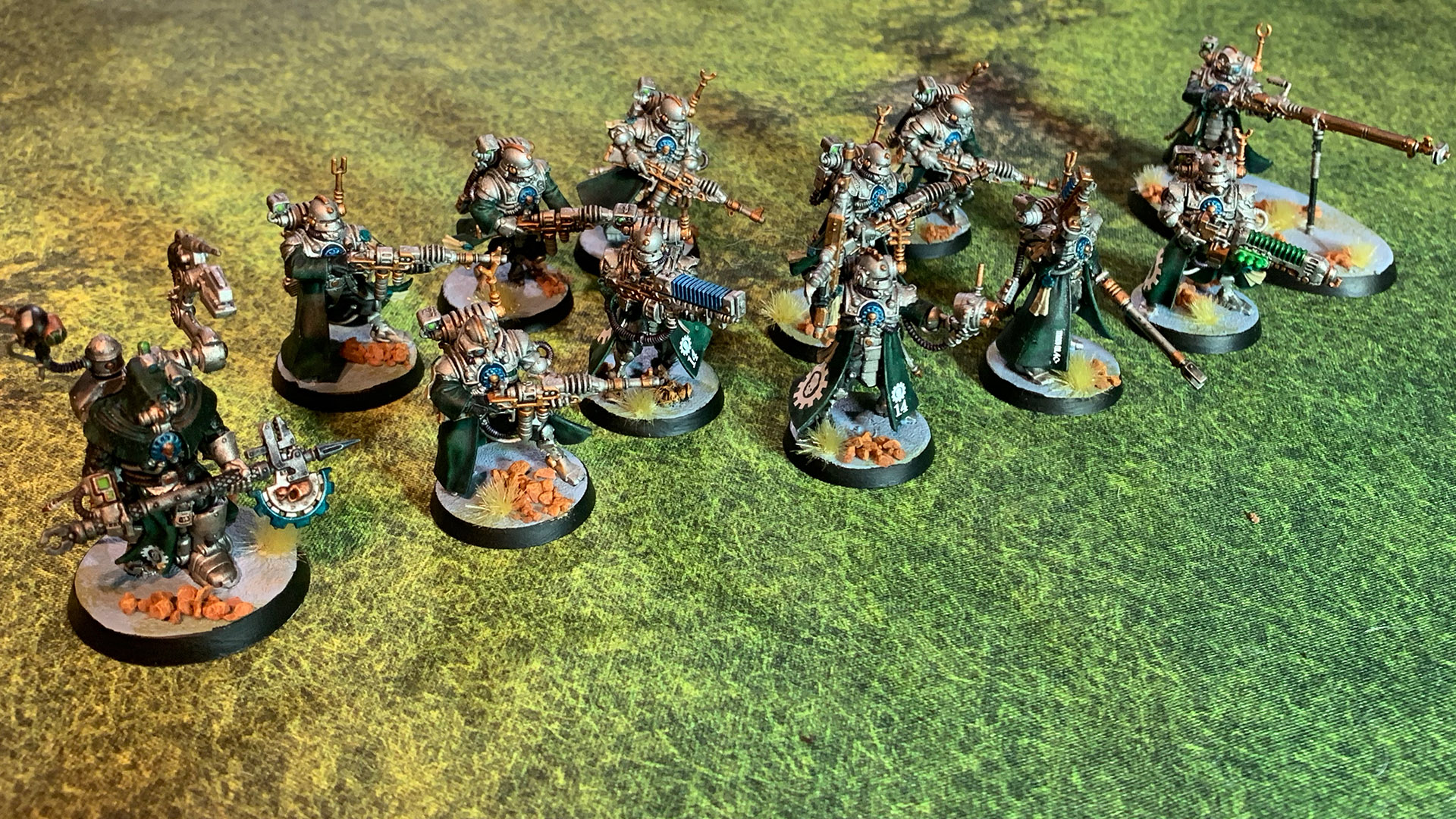 They may not be the best models I’ve ever painted, but I’m really happy with how they turned out. These models have so many different little bolts, lights, and wires, that you could spend a few days on just their backpacks alone. In fact, I might go back over the whole line when I’ve got my force tabletop ready, just to pick up on all the stuff I missed. 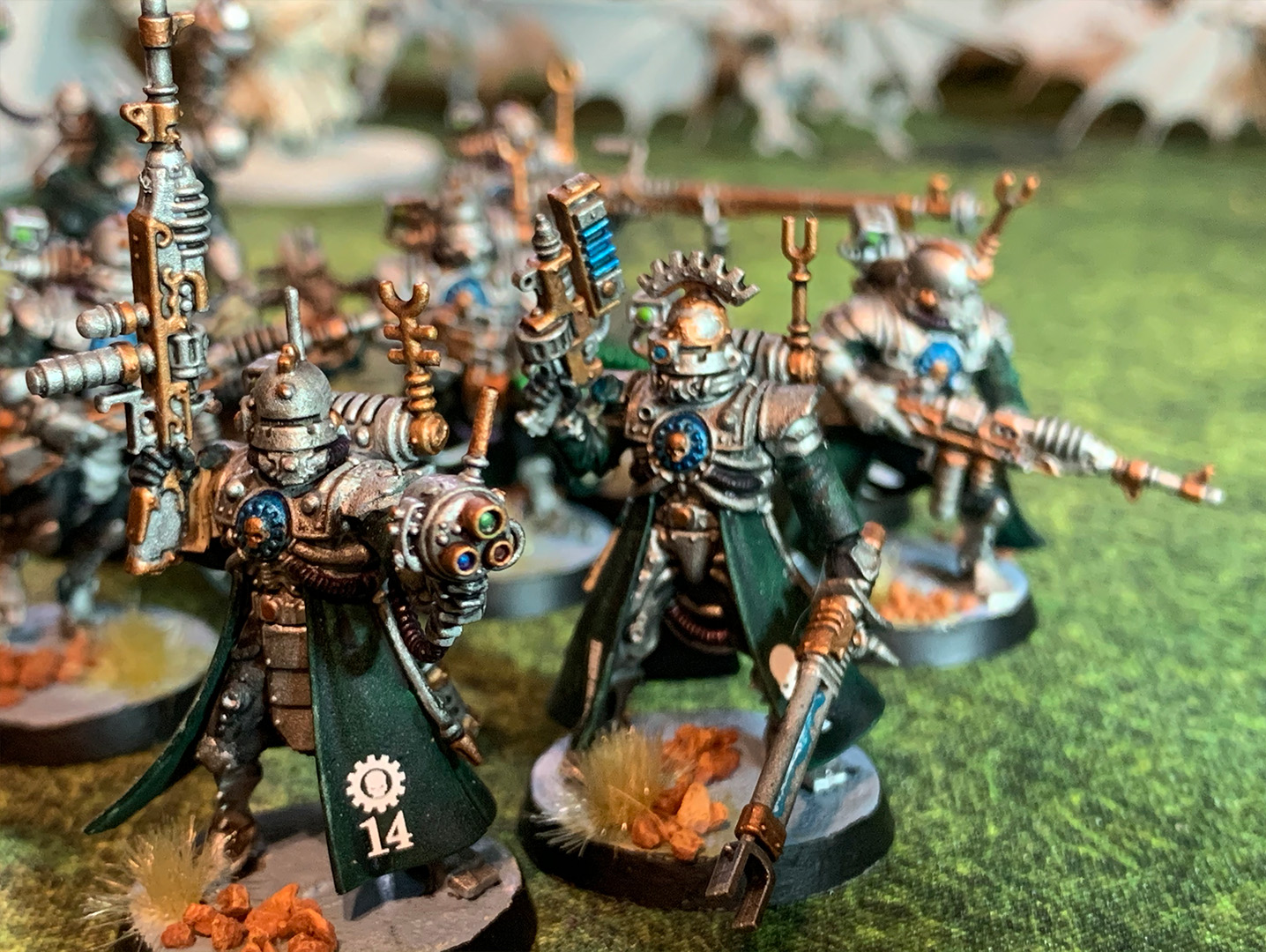 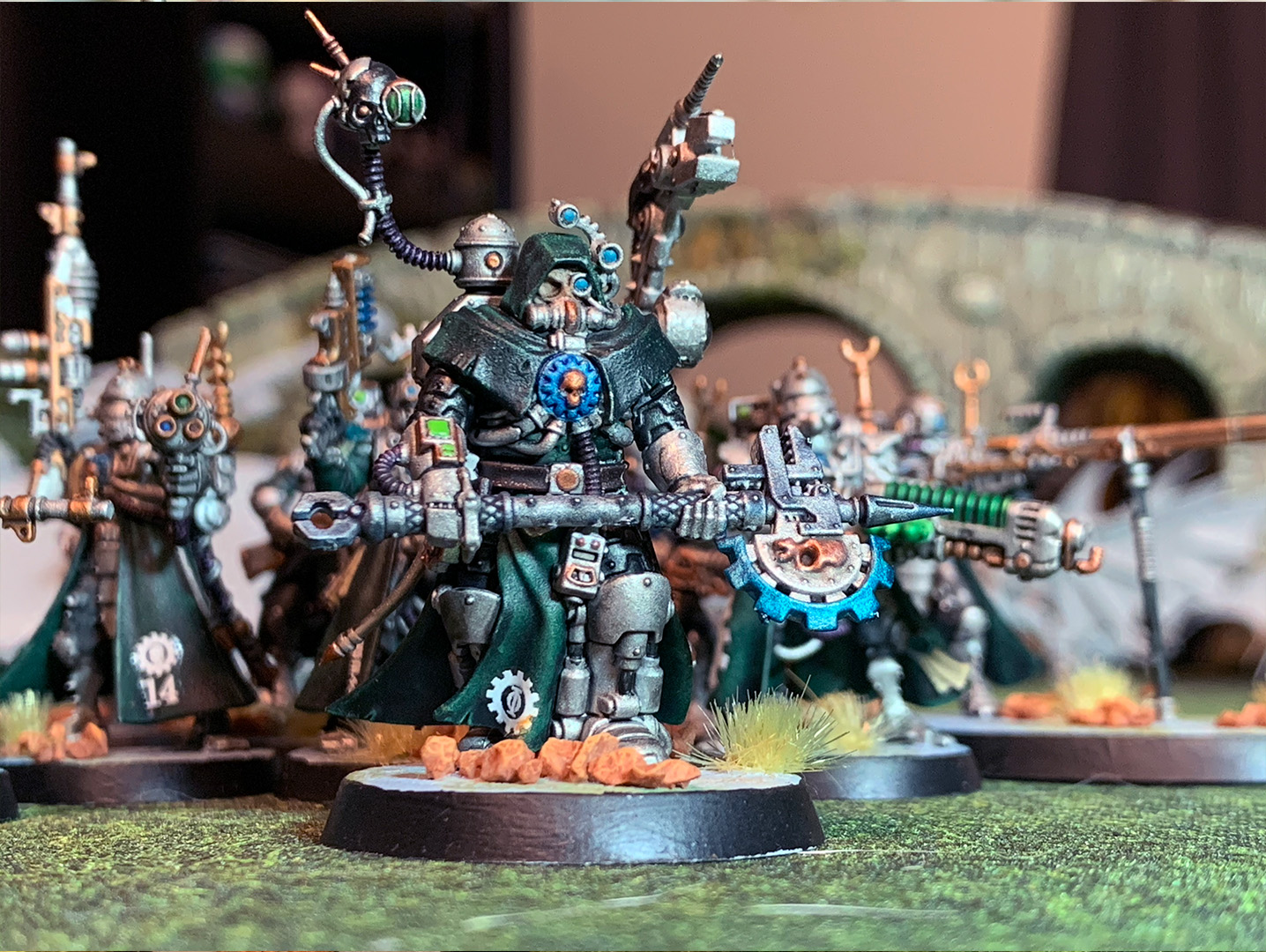 I also went with a fairly plain looking base, for a few reasons. One, after spending a season and a half of Star Trek: TNG painting them, I really didn’t want to dedicate myself to an overly complex base idea…especially as I’ll need to reproduce it across a lot of models for my final, 2,000 point list. Second, complex and overly-bright bases tend to distract the eye away from the model, especially when you’ve gone with darker tones like I did, and I already feel like this grey might need a wash or two to dull it down a bit. The little red rocks work as a nice little tribute to the Mars aesthetic, and the tufts are there because I own about 30 sheets of those things and really want to use them on something. 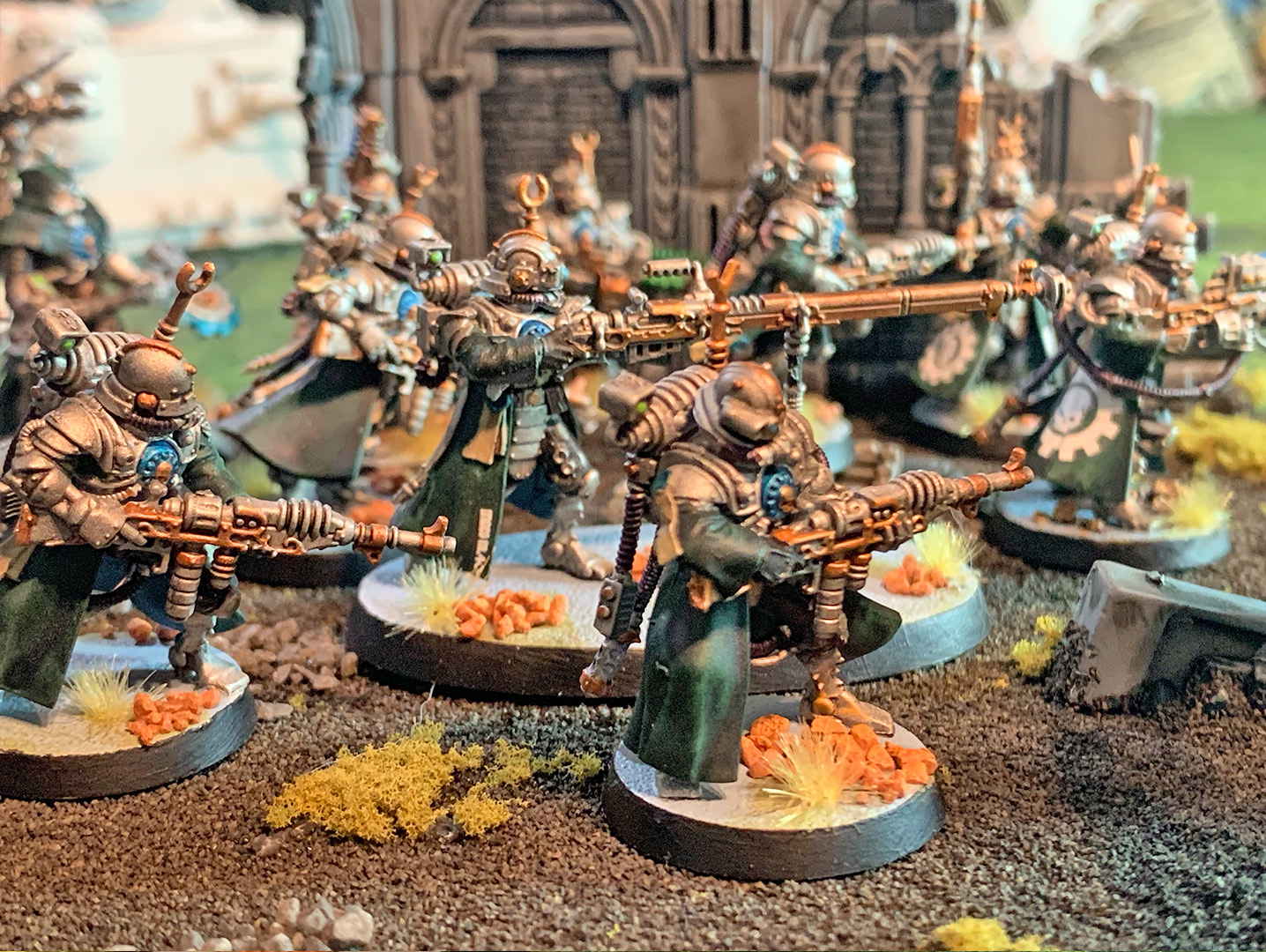 Which brings me to my next challenge: with the infantry done, its time to move onto the specialist units. I’ve got a good idea on the color scheme, so looking at what I have primed is far less intimidating than it was a week ago. Heck, I’m itching to take a brush to the Manipulus and all of his little wires (and his adorable dangling footsie). The Chicken won’t be much more than various shades of silver and gold, and the Fireflies are basically vanguard with big wings. So no real deviation from the theme there. As for the Electro-Priests, I’ll just be sticking with the pale skin from the GW job, but switching the red pants to green. 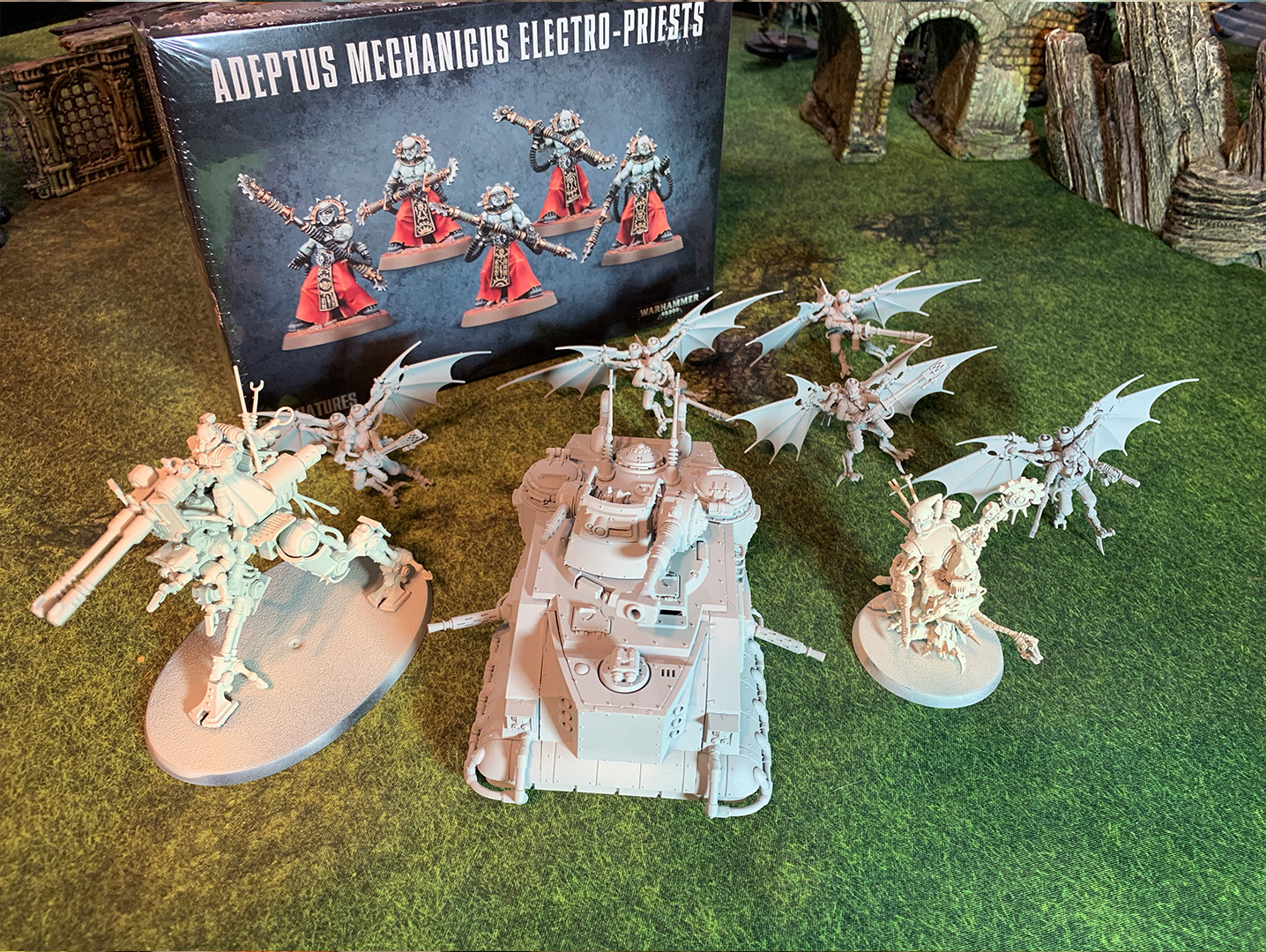 That just leaves the tank…which, in my next blog, I’ll waffle back and forth about more than an IHOP kitchen during dinner rush.*

*For our non-USA readers, IHOP stands for International House of Pancakes, a restaurant that serves food from exotic nations like Diabetes and Early Onset Obesity.

More from the Warp