Today I grew one step closer to my idea 40k beginners list. One step, that consisted of 72 individual pieces of plastic.

In my last post, I mentioned that the main draw of the Adaptus Mechanicus was their strange, ancient-yet-advanced technology, and how that represented itself in their various models. The Dunecrawler, despite basically being a robot version of the Octorok from Zelda games, is still number one in my heart when it comes to this style. But let me also introduce you to the Ironstrider:

There’s so much to appreciate on this model. The fact that it combined a motorcycle with an AT-ST, for one. It’s collection of tuning forks and kitchen silverware as a sensor array, for another. And of course, the cyborg welded to it’s underside that gets to pilot the tiny T-Rex arms. It hits all the marks for being goofy, yet somehow sinister at the same time, and I had planned on including two in my list to act as fast moving predators with some serious punch.

Then I built one.

I’ve built difficult kits in this hobby several times over, and while I’m probably not the best at putting together little plastic bits, I do feel fairly confident in doing so. Nothing could ever be as frustrating as the Morghasts, or fit together as poorly as the Ophidian Archway. And to be fair, the Ironstrider kit is special in its own way – not only does it included dozens of parts the size and width of half of a fingernail, it also fits together multiple ways…but only a few will actually line up correctly. It’s one of those wonderful kits where you reach page five of the instructions and realize that, on page two, the angle of the leg you glued on means that now the left side of the kit wont line up properly.

Somehow I ended up with a choice: either hack off some bits from the model and find a way to glue them back on later, or field a Ironstrider that was constantly doing a 75 degree split. I went with the first option, cutting off the wires that run from the cyborg pilot to the legs of the machine itself. While it doesn’t look terrible, it does look a bit goofy to have his legs just dangling there. 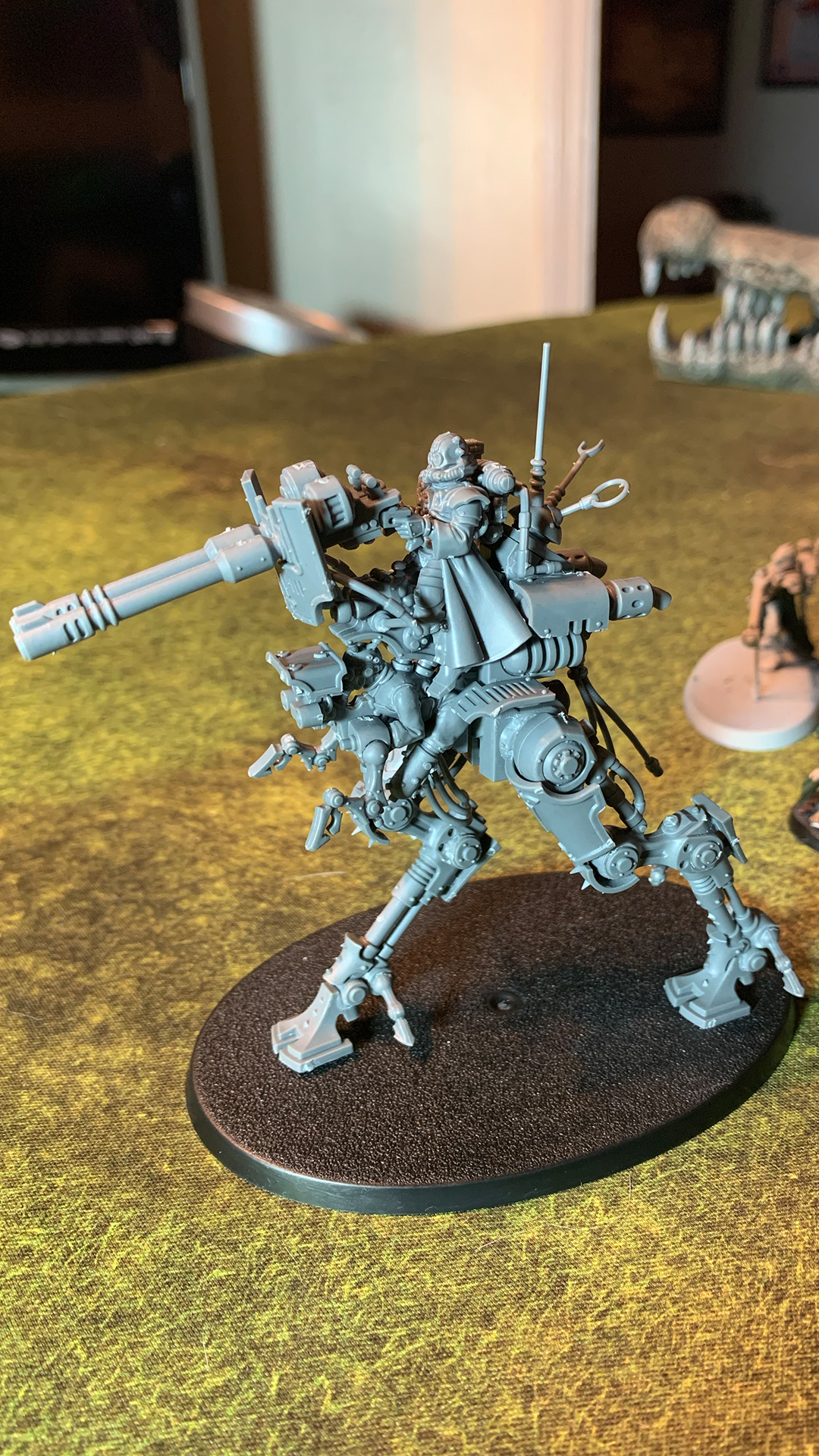 I mean, it’s no skeleton crotch monster, so he’s got that going for him.

Thankfully, I have enough chains, wires, and bits from years of collecting that I’ll probably be able to make it look less awkward, or at least less obvious. And maybe the second time around (yes I’m still planning on running at least two) I’ll have a better understanding of what the end product is so I don’t glue myself into another Rockette high-kick situation.

Or maybe I’ll just cut off his legs entirely and replace them with skulls. That seems pretty on brand.