This article is the second part of a narrative hobby series organized by Giga-Bites Cafe. Click here to join in!

Night began to fall across the battlefield. The sky began to shift from a jaundice yellow to bruised purple, each shade in between as beautiful as one of the glorious afflictions Grandfather had bestowed upon the thousands of his followers surging towards the walls of Baystorm. Torchlight began to dot the city walls, each one a small glimmer trying desperately to pierce the haze of flies and smoke. The defenders of Bayside maneuvered into tight shield walls, halberds held forward against the encroaching horde.

Bactoth, Bilepiper of the Festerscab Legion, cleared his throat. He hadn’t come up with a perfect limerick just yet, but knew that once he started to sing, the words would flow like pus from a joyful sore. Before a single syllable escaped his scab-covered lips, a sudden burst of fire to his side sent the demon toppling. Dazed, he stumbled to his feet, a wave of Nurglings assembling around him as a putrid shield.

Behind the line of mortals, a trio of mechanical constructs lurched forward on iron wheels, slowly scanning the ground with their cannons. Another target sighted, they spoke fire again, hurling bile and blood into the air as it blasted through a wave of Plaguebearers. A cheer went up from the masses of humans as Boilpus, one of the Great Unclean Ones, collapsed intop a pile of blubber and smoldering flesh. Bactoth could see Mump, his proboscis mouth flinging spittle towards the lines of demons, but the roar of the cannon fire drowned out his commands. The Bilepiper chuckled to himself; if there was one thing Mump hated more than not being heard, it was not being heard while being shot with a very large cannon. Or so he assumed.

Bactoth scampered to his knees, keeping low to the ground as he crawled across the already-decomposing bodies of Baystorm’s mortal armies. He quickly made his way back from the line of fire and iron, only stopping as his hands fell upon the roots of a Gnarlmaw. The tree was full size now, with rusted bells and chimes dangling from each icor-covered branch. Bactoth seized one of the branches and began to shake furiously, delighting in the dull clanks and clangs that emanated with eerie presence over the sounds of the battle.

With the sickening sound of a cracking ribcage, a tear appeared at the tree, bathing Bactoth in green light. The Bilepiper clapped gleefully as the Riders of Festerscab burst forth from Grandfather’s domain, their Rot Fly mounts barreling towards the enemy with a speed uncharacteristic of their bloated forms. Bactoth loved to watch the Riders attack; each one was chosen from the most elite Plaguebearers, and although their disposition was just as sour as always, they took joy in their murderous work. Raising their plaguetouched blades to the sky, they soared over the mortals in a haze of rotten miasma. 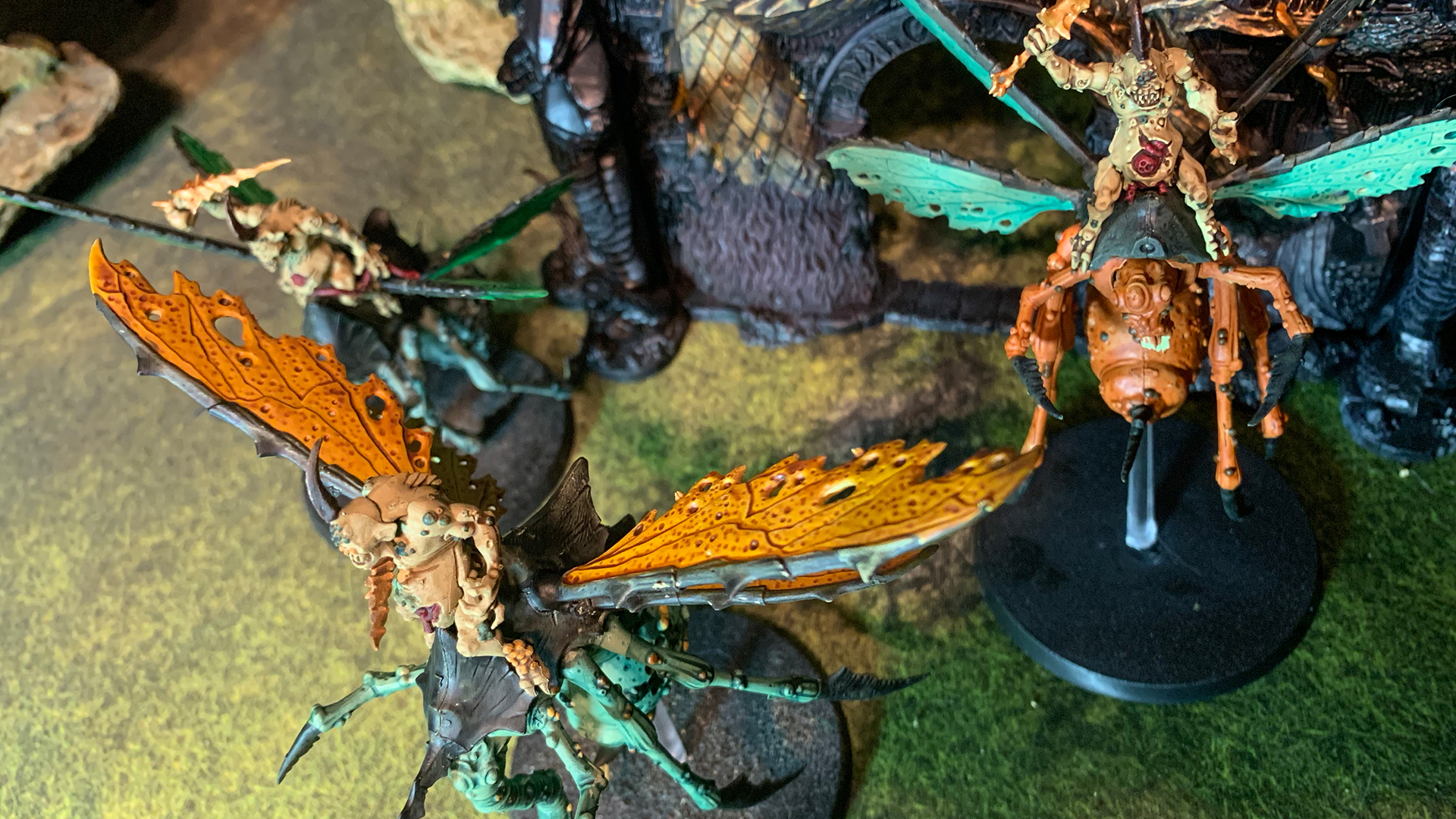 Shouts and chaos consumed the line of defenders as they swung their halberds frantically above them, but found little success as the Riders struck directly from above, dropping death heads full of disease into the mortals below. Too slow to adjust to these new targets, the metal wagons began to retreat, firing wildly into the cloud of flies. A hatch on the largest machine opened and a human with red plumage emerged halfway, barking orders to those around it.

The Riders descended with a sudden coherence and coordination, their seemingly random attack striking with deadly purpose. Before the hatch could be closed, a single death head plopped into the vessel, and Bactoth watched cackling as the mortals inside tried frantically to escape their diseased tomb. The machine roared forward, seemingly out of control, crushing mortal and demon alike as it’s silver carapace turned rust-red.

“Listen here you rancid idiots,” Mump bellowed out across the horde of demons, the cannon fire finally ceasing enough to be heard, “Bring these mortals the true gift of disease!” A dull cheer went up as the pile of Plaguebearers, Nurglings, and Beasts pushed forward to take advantage of the opening provided by their aerial reinforcements. Mump watched for a few moments, then turned from the fight and approached the corpse of Boilpus. With a quick jot on his scroll, he faced a small group of Plaguebearers who had taken cover behind the behemoth, seemingly avoiding the battle. Mump, however, found that they were doing just as he commanded.

While his command technically included any of the lesser demons, Mump preferred to work with his personal detachment, the Festerscab Septemviral. More virulent and vicious than the average Plaguebearer, each one had been blessed with exactly seven of Grandfather’s favorite gifts, perfectly suited for breaking mortal strongholds. Mump had held them in reserve against the Chosen of Sigmar, who proved resilient to most of their poxes; but as those warriors had long since left the battlefield, he saw an opportunity to end the siege decisively. Motioning silently, he led them around the bloated corpse, dashing with unnatural quickness towards the ocean cliffs that Baystorm thought insurmountable, even to demons. 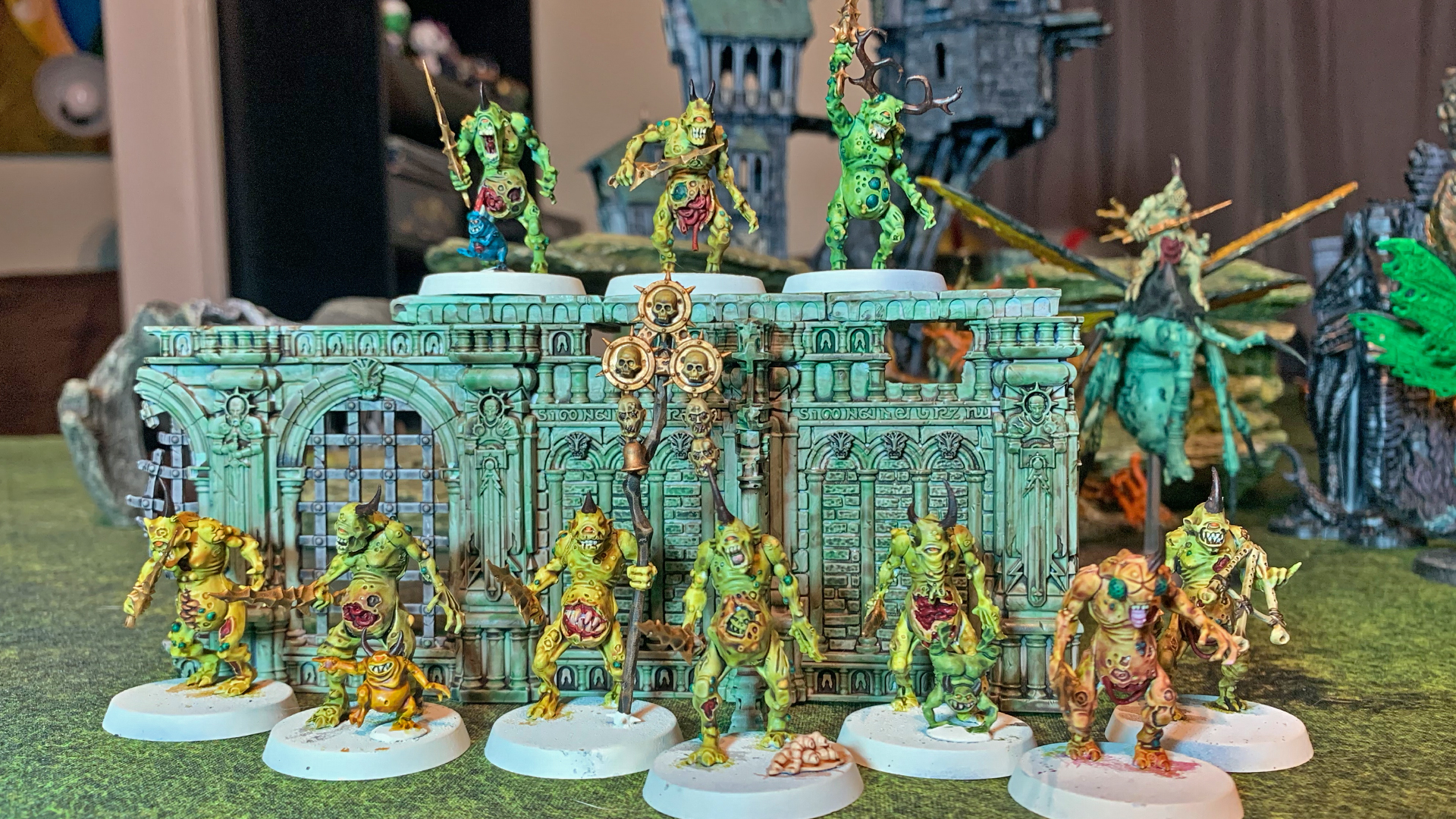 Reaching the precipice of the thousand-foot drop under cover of darkness, the demons all but ignored the din of battle behind them. Carefully, their Plagueridden began to unravel his intestines, dangling the purple and red tubing down the side of the rocky cliff. One by one, each demon slid down the slick tubing, swinging themselves onto a nearly-imperceivable ledge. Making their way single file along the rocky path, they entered a cave that was all but hidden from any other angle.

“I guess the rats are good for something after all,” Mump mumbled to himself begrudgingly. Ahead of them, the cave wound and sloped upwards, climbing even higher than the walls of the city built into it. The roar of the siege was nothing more than a low rumble now, and eventually he began to hear the faint sound of running water. A few moments later, the demons stood in a cavern, a small waterfall emptying itself into a metal grate at their feet. Despite the presence of a fire pit and several chairs, no humans guarded this entrance. The faint smell of blood and fresh scratches on the hard stone told Mump that the Pestilin’s had already claimed part of their reward to the tune of several new experiments.

Encircling the grate, each Septemviral drew their blades across their rancid flesh, spilling blood and bile into the waterway below. The sicking freshness of the mountain spring began to smell of sweet disease, and even as it flowed into the carved tunnel, the greenish hue seemed to creep upwards towards the source. Mump watched carefully for a few moments, taking quick notes onto his scroll, before ordering his entourage back down the path.

Mump allowed himself something resembling a smile, though no other demon saw it. The siege outside was irrelevant now, within days, the entire city would come to see the glory of Grandfather’s embrace. When the city walls finally cracked open like a freshly rotten skull, Mump would be there to count each new gift that wrote itself across the skin of the mortals.

His only hope was that one of the steam tanks had already crushed Bactoth.