To quote a famous doctor, “Just this once, everybody lives.”

The Stormcast Eternals are one of the most flexible factions in all of Age of Sigmar; they can be played as a shooting, melee, or magic army and win games as any of them. But you know what they are really good at? Refusing to die.

Lord-Arcanum – Lets ignore the fact that the best wizard Sigmar can make can only cast one spell a turn; that’s all he’s going to need. This guy is here to unlock Sequiters as battle line, but besides that, he’s your chance at dropping the Comet directly wherever you don’t want the enemy to hang out. Plus, his Cycle of the Storm ability will keep your troops alive longer, and his signature spell (-1 to hit for an enemy unit until your next hero phase)  is great for holding the line, especially if you might get double-turned. We’re going with Staunch Defender as his command trait because it’s still one of the best in the game…and it stacks with the rest of the bonuses this list can generate.

Celestant Prime – Your secret weapon. How can a huge, winged avenging angel be secretive? By keeping him off the table for the first two turns of the battle, there’s a good chance your opponent will simply forget about it, or more likely, not be able to keep planning for where he’s going to land. With adding 2 to his attacks for every turn he stays in the sky, when he does land, it’s going to be with the force of a truck made of hammers. Of course, you can deploy him earlier if needed, but hitting something with SEVEN attacks at 3+/2+/-3/3 damage is probably going to kill it. A lot.

Lord-Celestant on Stardrake – Stardrakes are always somewhat misleading, because for a huge lightning dragon, they actually don’t put out much damage. What they DO excel at is taking a lot of melee damage and throwing it back into the attacking unit (well that and being able to sniper-shot anything on the board with lightning). With a little help from his friends, he’ll have a 2+ save, re-rolling ones, and on a successful re-rolled save EVERY enemy unit within 3″ suffers a mortal wound.

Lord-Castellant – A perennial favorite in defensive Stormcast lists, not only does he give a unit the ability to add one to saves automatically (it’s not a spell or command ability, so therefore practically unstoppable), that unit also heals a wound on a 7+ roll. As this stacks with Staunch Defender, that means your Stardrake is now at a 1+ save, and heals a wound on a roll of 5 or 6. Pretty nice right? His artifact will also help protect you against any shooting that you might encounter, making it MUCH harder for armies like KO to get that exploding 6. Plus he comes with a free doggo. 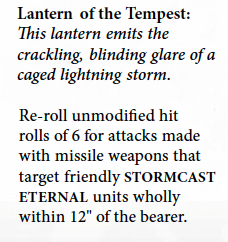 Knight-Azyros – Everyone loves being able to re-roll hits of one, especially as this winged fellow lets you do it to any enemy model within 10″ of himself. In this list, it lets your Sequiters focus on defense, and in a pinch he can fly across the board to help secure an objective or pick off a wounded hero. His lantern also explodes once a game to do D3 mortal wounds to every enemy within 8″, or D6 if they are Chaos. Eat that, Tzeentch.

Knight-Vexilor – Has your opponent finally reached your defensive circle, and you’re about to face a lot of heavy damage? Wouldn’t it be frustrating for them if an entire unit just teleported from anywhere on the table to anywhere else on the table? I bet it would be.

Sequitors – Not much to say here, these are your objective holders and should almost always empower their shields for maximum staying power. We’re actually gong with less Greatmaces than you could technically bring, because the idea is to withstand the damage more than dealing it out, so you’ll need those shields.

Judicators – Still one of the most reliable shooting units in the game, their job is to sit behind a wall of Sequitors (or a Stardrake) and whittle down monsters and heroes.

A lot of how this list works will depend on what your opponent brings, and how you deploy your troops. It’s worth noting that, because the Celestant Prime’s ability to deploy in reserve is not by the Stormcast faction ability, he doesn’t ‘count’ against you when determining how many units need to be on the table. That leaves you with four on the table and four in the sky as a standard, and which four you deploy will be mostly dependent on what’s about to fight them.

For instance, if you’re looking at a lot of shooting, you’ll probably want to drop the Castellant alongside the Arcanum for maximum arial defense. If it looks like you’ll be up against an alpha-strike army, let them try to wipe out a Castellant-boosted Stardrake while you simply drop the rest of the army onto the objectives. If you’re staring down another defensive army, sling a Comet into their backlines on turn one and see if that doesn’t motivate them to move while your Stardrake hits their heroes with lightning. Your goal with this list is not going to be killing units, but rather, forcing your opponent to try and predict which nigh-indestructible shield wall to engage with, and then redeploying through the Vexilor to threaten their weak spots.

And then, just when things look bleak, drop the Celestant-Prime into their backline and recreate the scene in Avengers:Infinity War where Thor shows up to Wakanda. Just remember to aim for the head. 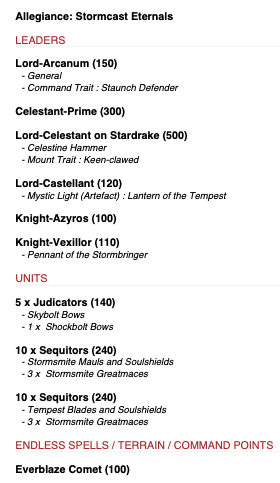