This week’s list is built around the Troggherd battalion from the Gloomspite Gitz faction. It’s a semi-competitive list with a few tricks and some serious melee power.

As soon as I got my hands on the Gloomspite Gitz book, I flipped immediately to the Troggoth section. Part of that was for their excellent new sculpts, and part was because I had just painted around 40 Plaguebearers, so the idea of setting up for another assembly line of painting wasn’t one I enjoyed. Thankfully, you can get a pretty decent, low-model count army from the Troggs, and while it won’t be usurping the top meta lists anytime soon, it’s a blast for casual play. 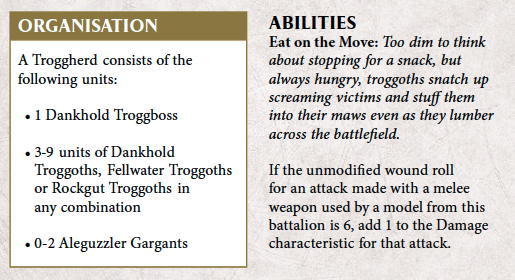 The great thing about this battalion, besides that it gives extra damage to an already murderous set of damage-dealers, is that it lets you bring most of the army in that one drop. Only Skragrott and the Madcap Shaman have to be set up solo, but a 2k list with a three-drop setup is still pretty nice, especially as it’ll usually let you dictate the first turn. This is a list that won’t ever win on having more models than the opponent, but there are few things that can withstand the full hit of 6 Rockgut Troggoths on a charge.

If you’re looking for alternate builds around this, you’ll probably look at dropping the Gargants. I happened to have two already built from the Allies box set released a few years ago, so for me they were easy enough to drop in. They aren’t as dependable as the rest of your army, but can be surprisingly damaging. Just don’t roll a double on the charge.

Dankhold Troggboss – Your big smashing leader. With Ghyrstrike his melee attack profile is 4/2+/2+/-2/D6, which with solid damage rolls can one-shot up to an 24 wound model in one go. This guy will absolutely pummel anything he comes in contact with, and he’ll do it while shrugging magic on a 4+. The Loonskin will keep him healthy, and don’t forget that he does benefit from Look Out Sir as well. But how do you make sure the Bad Moon doesn’t just fly right off the board on turn 3, essentially negating his entire command trait?

Skragrott the Loonking – Ok, so the leader of the Gitz isn’t here just to manipulate the moon, but it’s nice to have either way. His real strength is pinging as many hero units as possible with his shooting attack (which automatically deals 1 mortal wound at the end of each battle round if at least one shot lands, thus slowly pinging their low-wound sorcerers to death). Have him set up the Cauldron near the fight; he’s pretty survivable for a Grot.

Madcap Shaman – I love these little weirdos, if not just for the fact that they are SO small your opponent will forget about them half the time. Sometimes you’ll forget about them too, which is unfortunate as this guy has one of the best artifacts available(at the beginning of combat, pick a unit within 12″, it gets -1 to save rolls), and a pretty great spell too (grants -1 to hit in shooting to a friendly unit, helping your slow boys make their way in safely to melee). Tuck him in behind a pile of Rockgut and watch what happens when -2 rend hits a unit with -1 save.

Rockgut Troggoths – A 5+ shrug to all wounds, -2 rend with 3 damage a swing, AND a shooting attack that automatically deals D3 if this unit is at 6 models. Not bad right? Your biggest issue will be having them shot straight off the board, but that’s what the Madcap / Palisade are here for. Charge them into the biggest, meanest units on the board and crush them. You’ll probably want to avoid getting them stuck in a tarpit though, as all of their rend and damage is wasted on a block of 40 skeletons.

Fellwater Troggots – These are your tarpit tarpitters, sliding in with an automatic’s -1 to hit in melee because they’re really, really stinky. They also have a solid shooting attack at 1/2+/3+/-2/D3, but with only a 6″ range you’ll likely just be barfing on whatever you’re already fighting. I split them into two groups of three for maximum stickiness.

Aleguzzler Gargant – Its like if your perpetually-drunk uncle, instead of ruining the family Christmas party again, suddenly grew twenty feet tall and started headbutting Orruks. Just like that. Their damage output can vary wildly, but use them as drunk hero-seeking missiles and your opponent will have to deal with them.

This list plays pretty simply, but has a lot of useful tools in it. Skraggrot is the best target for the Cauldron, as he automatically has two spells per turn and a +1 to cast, but don’t forget about the Palisade. If you’re going up against an army with a lot of shooting, you’ll want to drop it in a way that prevents them from simply removing your slow troops before they even see combat. Between that and the Madcap giving a unit -1 to hit from missile weapons, you can make sure your reach the objectives. After that, it’s just a matter of your melee versus theirs, and most of the time yours will be way, way more powerful. 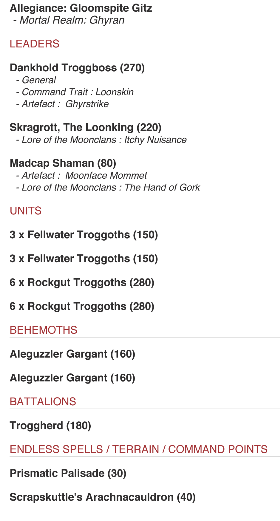