The sorceress Drusa Kraeth was a power behind the scenes in Anvilgard for years before it fell to Morathi, and her machinations were key in allowing the Shadow Queen a strong foothold. Now, she marches to war alongside her murderous Shadowhost, striking out to eliminate the remaining rebels of Anvilgard.

Of the four box sets released for Broken Realms, the Kraeth’s Shadowhost is probably tied for ‘most underwhelming’. Black Dragons are undeniably cool,  but the small amount of other troops included means that building a list from that box is more involved than the others. However, starting with two boxes provides a really nice basis for a fun, fast army that’s all about a surprisingly decent amount of damage in nearly every phase. 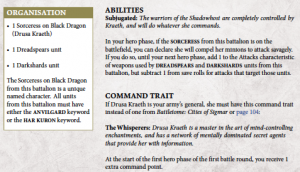 Sorceress on Black Dragon (Drusa Kraeth) – Your general for this list, Drusa provides a pretty powerful spell casting punch, especially if she stabs one of her Black Guard before casting for a sweet +2 bonus. This makes getting the horrifically good Vitriolic Spray to cast that much easier, melting your opponent’s armor. Even Archaeon will fall to the flurry of bolts from your Darkshards now.

Sorceress – Here to be your Adjutant, the Sorceress also provides extra unbinding and casting ability. Sap Strength is great for high-damage targets, slowing their advance through your lines of expendable warriors.

Dreadlord on Black Dragon – Your biggest and meanest hammer in the list, he’ll want to take the unit of Drakespawn with him across the board, smashing into your opponent’s lines. Giving him the Drakescale Cloak adds a nice 5+ aversive to his already decent 3+, meaning he’ll stick around after the initial charge to wreck anything that survives.

Assassin – An often underused unit, don’t write off the power of an Assassin popping out from a unit to bring down an unwary hero. With the Venomfang Blade, every roll of a 6 to wound will do a whopping 2D3 mortal wounds to his target, which can be the surprise kill that turns the tide. Or, your opponent will be forced to attack him first, wasting whatever plans they had to eliminate an 80 point model.

Darkshards – While their average shooting may not look like much (or compare to newer, more luminous aelves) these cheap warriors will fire off a lot of shots at something. If that something, say, has a save of “-” thanks to Drusa, those shots mean a lot more.

Dreadpears – The same as the Darkshards, but with melee, and the added bonus that they can hold an objective for a little longer. Form an old-school spear wall and let your opponent crash against it.

Drakespawn Knights – Part of the main damage potential of the list, these fast fellows will rocket across the board with your Dreadlord. They’ve got a surprisingly good 3+ save as well, so unlike a lot of other fast calvary, they’ll stick around for a while after to cause problems.

Black Guard – Good for holding an objective and surrounding Drusa. A 2″ range with a profile of 2/3+/3+/-1/1 isnt bad at all, and on top of that, they’ll add 1 to hit rolls if a hero is nearby. By the time your opponent makes it through everything else, they’ll take out the remains.

War Hydra – An additional threat that will heal itself over time, your opponent will either need to dedicate resources to taking it out, or deal with it attacking over the heads of your front lines of troops. With Few Gaze it has an insane 12″ bubble of -2 Bravery, so when you do chip away at a unit, many more will flee. Plus it’s a really cool model.

This list plays a lot like an old-school Total War list: set up your units in a big defensive pile and move forward slowly, forcing your opponent to waste time getting through Dreadspears while getting pelted with bolts and spells. The Dreadlord and Drakespawn should swing out and challenge anything that isn’t super well guarded, putting pressure on your opponent and driving them into your front lines. As you’re practically immune to battle shock thanks to Make an Example of the Weak, even your low-bravery units will stand and die slowly to any assault. 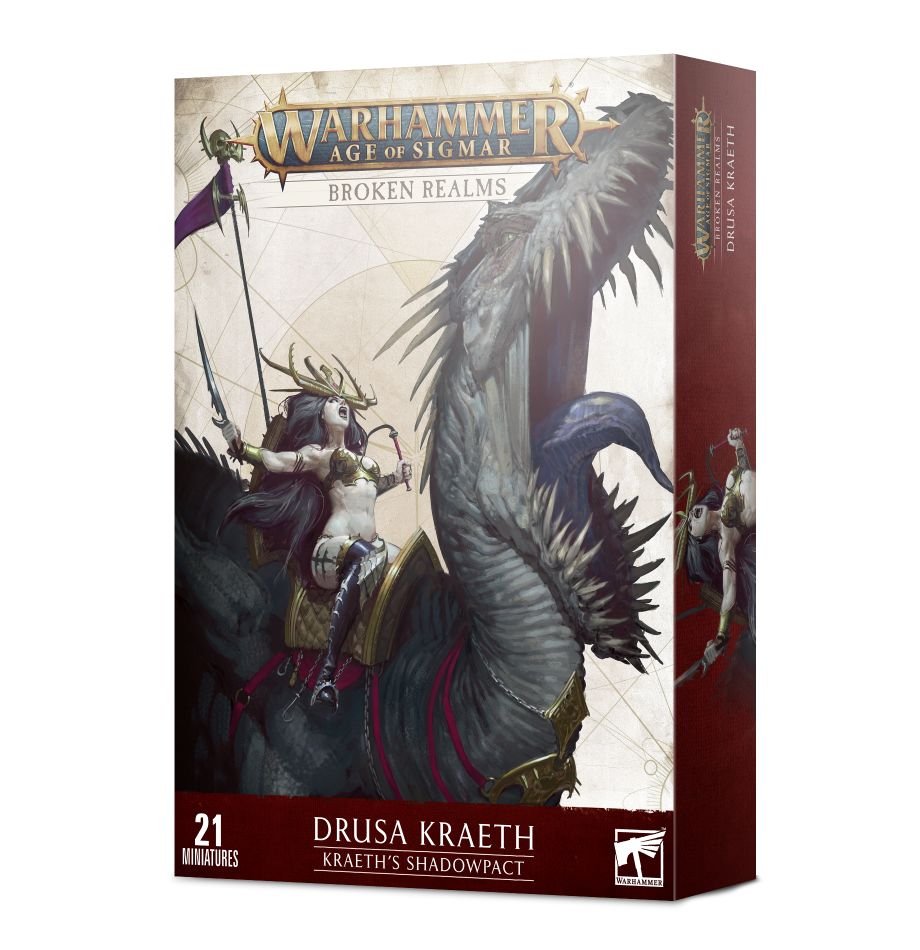