This week’s list is definitely more fluff than meta-crusher, but it also packs a few punches your opponent may not see coming. Let’s dive in (I’m not sorry).

Do you remember the old Scourgerunner battalion? It let you pick a unit to shoot, move, charge, or pile in and attack if they were within 8″ of the general, AND gave them all the ability to re-roll hits of 1 against Monsters. I guess GW thought that was way too good to keep, however, as the replacement is…lacking. But it still gets you the extra artifact, reduces your drops, and might come in handy what with all these giant rumors going around.

Black Ark Fleetmaster – A steal at 60 points, his purpose is to act as a force multiplier for the rest of your army. You certainly don’t want him anywhere near a real fight, unless he can pick off a wounded mage or an Ungor that isn’t paying attention. Unfortunately his command ability won’t help with the crossbow assault, but toss it on a Kharibdyss and watch it chow down. The cloak gives him a little more protection from getting shot off the board, but his real trick is to slow down your opponent’s damage output with his spell.

Celestial Hurricanum with Celestial Battlemage – So it’s a bit off-theme with the rest of the army, but this thing is going to cause all kinds of trouble if left alone. Firstly, it has a laser that can do a whopping 9 wounds of damage on a lucky shot, perfect for burning down a hero. It also boosts the spell casting of itself and your Battlemage, which is important for launching that sweet Vitriolic Spray right into your enemies eyes. And on top of that, it lets you add +1 to hit to all of your models within 10″ (until it takes damage) turning the normally annoying arrow spam of the Corsairs into a deadly barrage. We’re going to give it the Asphyxica Censor as well, which is made much better by it’s large base size.

Battlemage – You’re bringing this fellow for two purposes; one, an extra unbind attempt, and two, his signature Chamon spell absolutely punishes units with low saves, which are something this force might struggle with. Working in combination with the Fleetmaster and Hurricanum, you’ll easily shut down much stronger units. 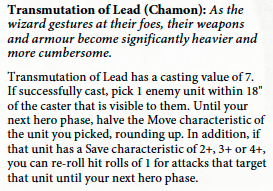 Black Ark Corsairs – Within range of the Hurricanum, a unit of 30 will be able to shoot 60 shots into an enemy with the profile of 3+/4+/-/1. It may not seem like much without rend, but you’ll still get around 20ish hits per attack, which can devastate units with poor armor saves. Or you know, units that had their armor saves entirely removed by your magic. They’re a bit crap in melee, even with the Fleetmaster’s boost, but thats why you brought the sea monsters.

Scourgerunner Chariots – Your opponent will wonder why you brought three of these instead of more bodies. You’ll then shoot them with six 18″ range attacks, 3+/3+/-1/D3. Any 6’s to hit do an automatic D3 mortal wounds, and don’t forget, if you’re near the Hurricanum you’ll be hitting on 2’s, and if its a Monster, wounding on 2’s as well. Would be real shame if that Zombie Dragon just fell apart right there, wouldn’t it?

Kharibdyss – Chances are, your opponent will target these monsters first, as they look a bit more terrifying than they actually are. But with each one of them getting a drake blood curse, they act as surprisingly sneaky modifiers. Each one has a huge 12″ -1 to Bravery aura, and one will bump that up to a -3 with the right curse. Unfortunately the battalion only allows for one, but keep them near the Hurricanum and they’ll shred through infantry, happily healing while they do it.

Positioning is going to be very important for this list, as well as knowing what your opponent’s list can do. You’ve got enough bodies and monsters to screen out a first turn charge, making sure to protect the Hurricanum and your heroes as best you can. Thanks to their small base size, you can screen a Kharibdyss with a line of Corsairs, then let it return the attack over them, as not many models have a 3″ range on their best melee attack profile. You’ll likely lose a few bodies here and there thanks to their relatively poor armor saves, but with smart screening, by that point you’ll be well on your way to a victory. Plus, you can talk like a pirate while doing it.