It’s like a cooking show where the judges just eat the competitors, and then the camera crew.

This week’s list is a treat for your hungry hungry ogors as they chow down on anything that stands in their way. It has a few tricks as well, and enough delicious magic to season your enemy to taste. 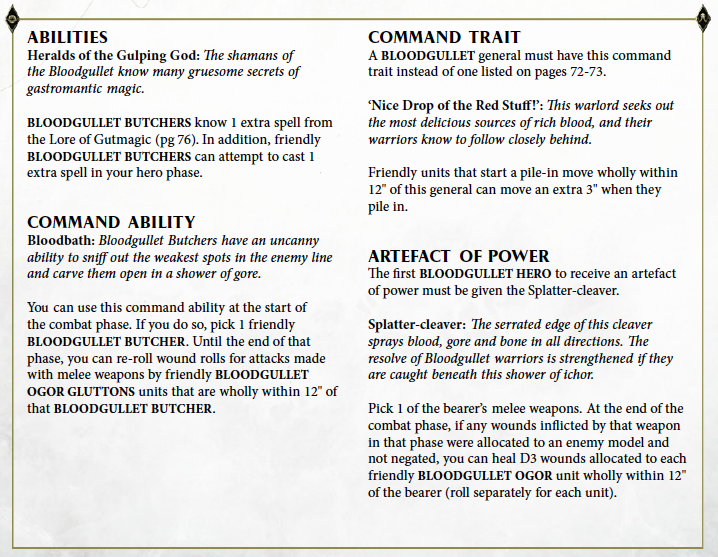 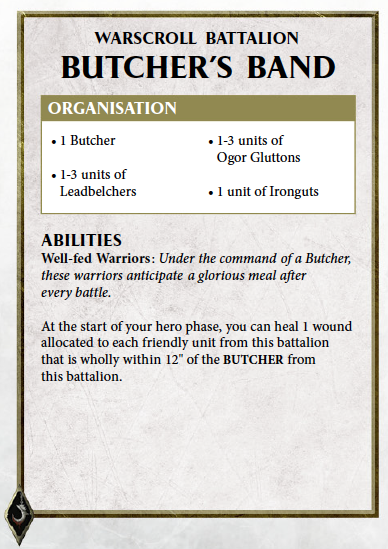 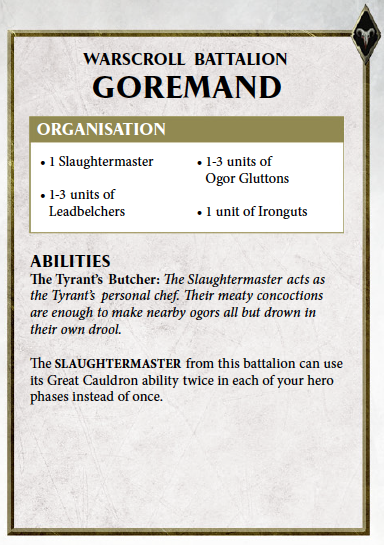 We want to make the most of our heroes with this one, so we’re bring two battalions to give them each the best in cutlery artifacts (and also reduce the drops down to three). For a list with so much Gutmagic, the Bloodgullet tribe is a natural choice- and luckily, there isn’t really a weakness in it like most subsections have as tax. Thanks to Goremand, your Slaughtermaster will get double use out of his delectable Great Cauldron, and Butcher’s Band helps keep your meaty bois full (and at full health) throughout the fight.

Butcher – While he isn’t the general, this fellow is probably the central part of the list. Being able to cast two spells a turn will really help amp up your smaller units to do the most damage possible. The combination of Blood Feast (+1 to attacks to a friendly unit) and Ribcracker (subtract 1 from enemy save rolls) can wipe out a tough defensive unit in one shot. He’s bringing along an adorable Shrunken Priest Head for a little more survivability as well.

Slaughtermaster – With the Wizardflesh Apron giving him three spells a turn, this messy lad will act more as a support unit to the army overall. A little Mystic Shield can go a long way for an already tough army, and Greasy Deluge (-1 to enemy hit rolls on a unit) should be used to stop low-accuracy attacks that deal high damage, or to entirely cripple a big block of weaker foes. At first glance, Fleshcrave Curse (D6 mortal wounds to an enemy, they also get +1 melee attacks) might not seem like a good trade off, but it’s perfect for sniping enemy wizards and support pieces. Enjoy that extra wizard staff attack, nerd.

Tyrant – What’s an Ogor list without a Tyrant? With the Big Name of Fateseeker giving him a 3+ save, he’s a durable cannonball of destruction and the perfect home for the Splatter-cleaver artifact. Keep him close to all of your units to take advantage of his command ability, if you need it, though with smaller unit sizes it likely won’t be an issue.

Ogor Gluttons – They may be the standard rank and file of an Ogor army, but don’t write them off as battle line tax. While they lack rend, they can deal a lot of damage to a weakened unit (see the Butcher’s spells) and provide a nice meat shield for your slightly less durable casters. Plus, each unit of 6 counts as 18 models for taking an objective.

Ironguts – With a little tact, this unit can counter-punch an enemy to dust. Let your Gluttons take the initial charge, then let these chaps swing their 2” weapons over their heads, demolishing whatever got too close. Its like whack-a-mole where the mole is your opponent’s skulls.

Leadbelchers – While your enemy is busy trying to get around the wall of muscle and fat that is your Gluttons and Ironguts, these guys are happy to stand just a bit back and rain down shrapnel. They aren’t terrible in melee either, but if you can keep them on the edge of an objective, they’ll help you claim it while providing a nice amount of ranged firepower.

Prismatic Palisade – If there’s one thing Ogors dont like (besides BMI based dietary routines) it’s getting shot by the skinny races. Prop this wall up to make your opponent have to come closer, or for even more fun, to block off their retreat.

Overall this list is fairly simple, but highly synergistic. While your spells are great for helping to chew through tough units, they aren’t essential to the raw power of the list. Your deployment should look something like a big circle, with Gluttons taking the forward hits and everything else following behind. If possible, let your opponent go first and slam into you, as you’ll likely heal off any real damage. Your raw damage will clear off their fast movers, and once you get moving, the world is your buffet.