My Orruktober adventure keeps trundling forward as I attempt to paint 103 Orruks in one month. Why do I do this to myself?

The Bonesplitterz has always been one of my favorite factions, lore-wise. The fact that they are the absolute maniacs of an already ridiculous culture takes them to an extreme that I love in the Warhammer universe, which is a universe already populated with super-exaggerated concepts. They are a force of nature with spears and lots of shouting, ready to rampage across literally anything in pursuit of their goals. Like their well-armored cousins in the Ironjawz, they are far more interested in a good fight and a mighty kill than any sort of tactical advantage or planning. Something about an entire faction that just doesn’t care what anyone else is doing is a wonderful standout in a game full of brilliant military minds and devious plans. They show up, they smash a bunch of stuff, and then they leave. I think only Troggs have less of a logical reason for their actions.

On the tabletop, the Bonesplitterz were one of the original ‘buckets o dice’ style armies. People speak in whispers of Kunnin Rukk being used to unleash 90 ranged attacks twice a turn, and sure, most of them would miss, but it was enough to solidly sink any hero or support unit that thought they could withstand the barrage. While the new book has slightly reduced the ridiculous dice mountain required to play this faction, it’s definitely brought about more options to help them succeed against ofter factions, even if those opponents didn’t bring a few monsters along.

Unlike most other battle tomes, the sub-factions for Bonesplitterz are all very solid and worthy of both casual and competitive play. Sure, each one still keeps to the trend of having either the command ability, command trait, or artifact be, essentially, a tax for running them, but none fall entirely to the ‘narrative only’ bucket. It gives the army a lot more longevity than one-trick factions, and that plus the relatively low turnout of Bonesplitterz to tournaments can make for a surprisingly difficult faction to deal with when it’s coming at you.

While I actually disagree, the general consensus seems to be that Drakkfoot is the ‘best’ tribe to take, purely for this ability: 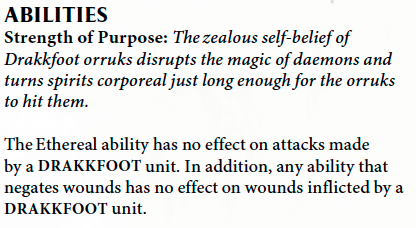 Now, don’t get me wrong, ignoring after-saves is a super-powerful tool against certain armies. Ignoring Ethereal is a nice tough, but really, thats just picking on Nighthaunt players and they’ve had a hard enough time of it already. However, I would counter that this tribe was written for an environment where some units had two additional saves ON TOP of their usual one. In that setting, sure, it was a silver bullet, but in the new age of only one additional wound save, it loses a bit of its power. The tribe does give units a neat chance to unbind a spell, but losing a command trait is not really worth a Fireball spell option, especially when the Bonesplitterz lore is packed with good spellcasting options. While still solid, I don’t personally feel it’s the auto-take that it once was.

Moving along, the Bonegrinz, who have an ability that can honestly wreck a lot of well made plans: 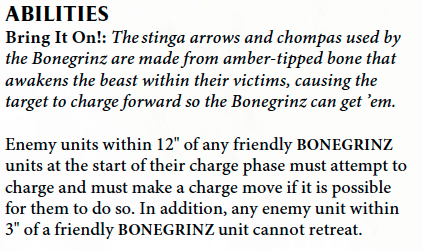 Shooting units trying to stay outside of your range? Not if they’re within charge range. Units that are usually nestled safely behind screens are forced to mix it up with your Orruks, and as extra icing on the Waaagh cake, they can’t retreat at all. Considering the ludicrous speed of this faction, you could easily fling 20 Boarboys across the table on turn 1, then snag as many objectives as possible while your opponent tries to chew through 60 wounds of table-blocking pigs. Sure, you probably won’t kill a whole lot, but by the time the enemy is finally free of that wave…you can send in another one. And the command ability? 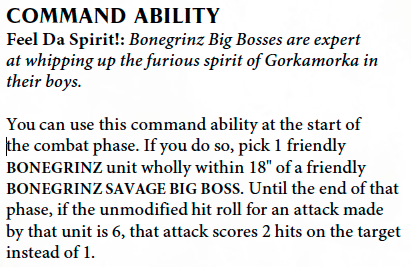 You can never have too many hits, right?

Last but not least is the Icebone tribe, who actually have two abilities I’m going to highlight here:

The first, Freezing Strike, is elegant, simple, and solidly good. Those buckets of attacks are a lot more deadly with a little rend on them, especially if you’re stacking exploding 6’s to hit to really get the maximum mileage from them. The one thing this faction really lacks (besides anything better than a 5+ save) is reliable rend, so this adds a nice bit of threat. Plus it applies to your boar mounts as well.

The second, Freeze and Run, adds in a surprise amount of tactics to an army that doesn’t wear pants. While it requires a little more setup (you’ll likely need the mounted Maniak Weirdnob as your hero) it lets your piggies strike hard, then peel out. With their natural 12″ move, you’ll likely be able to threaten objectives behind the enemy lines, or simply hit them and set up for a flank. Age of Sigmar is ultimately a game about objectives, and if you’re controlling the board with waves of pigs, it won’t really matter that you aren’t killing much.

With all of these options, there isn’t really a right or wrong way to play Bonesplitterz, which is something I love about the faction. And who knows, with all these Mega-Gargants stomping around, maybe we’ll see a resurgence of the loinclothed lunatics.

And now, back to painting. Halfway there? 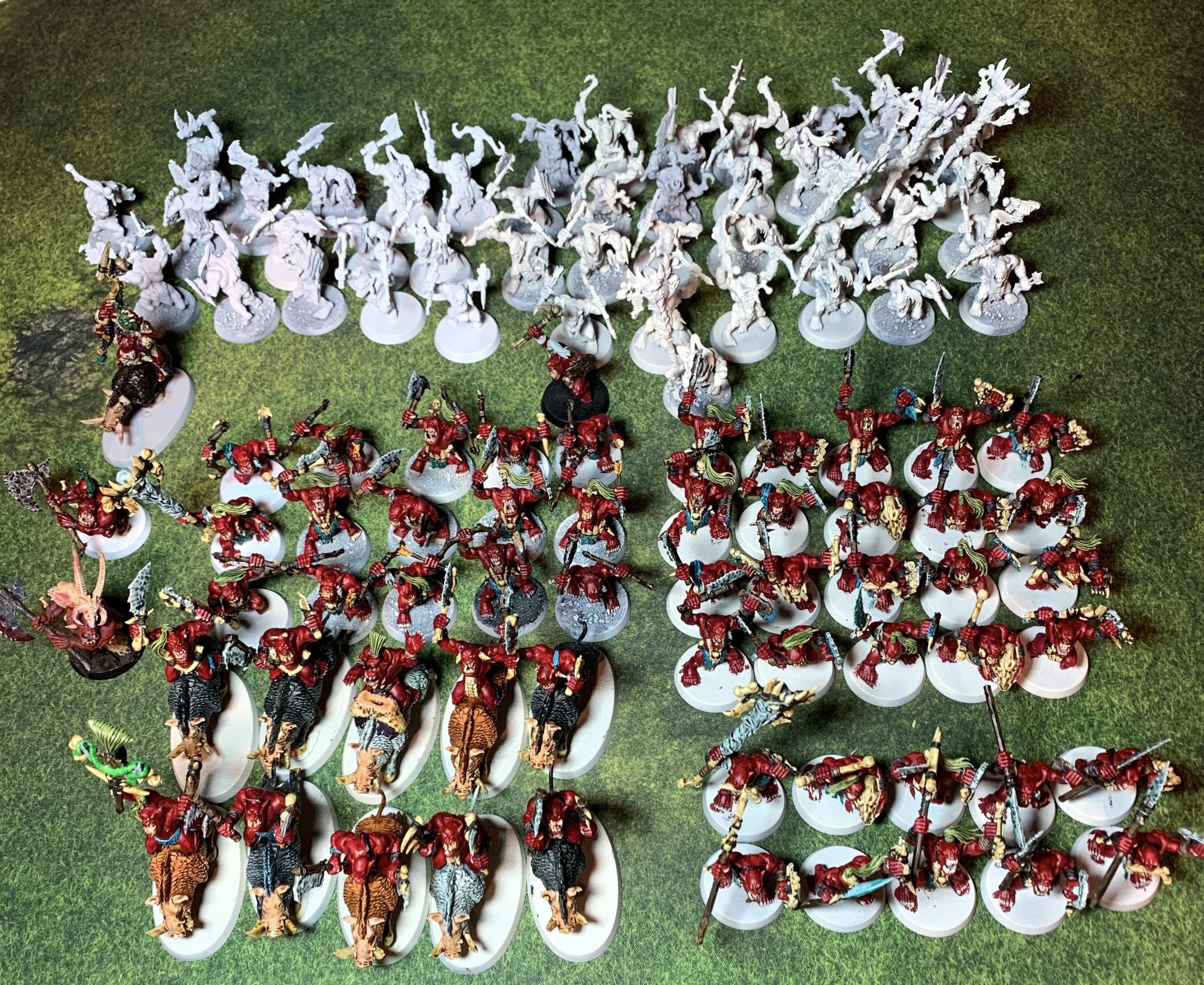