This article is the first part of a narrative hobby series organized by Giga-Bites Cafe. Click here to join in!

Mump Glopspleen, Scriviner of the Festerscab Legion, gazed with encrusted eyes down onto the battlefield below. Carefully observing the pulsating waves of Grandfather’s Plaguebearers, his eyes fixated on a particular demon, who’s dull chanting had grown momentarily silent. Almost as if feeling the eyes of the strict Scriviner upon him, the demon suddenly began to count loudly from one, his rusted blade piercing through the armor of his foe. With a sudden blast of lightning, the enemy warrior disappeared, leaving naught but a scorched mark on a field of bile and blood. Mump jotted down the demon’s name for later punishment, as to miscount the glorious diseases of their benevolent Grandfather was, in his mind, more egregious than falling to enemy blows.

“You lot! Not worth your pustules, are you? Sweep left and start over!” Mump’s voice echoed over the din of battle, and within seconds, the puke-green horde shifted, forcing their stalwart foes into a defensive position. Mump grumbled to himself, making a quick note of the ineffectiveness of Ghurish Rabirot against Sigmar’s chosen. He squinted furiously at a pair of Nurglings dancing at his feet, happily swinging a bit of entrail between them. Giving one of them a sharp kick, he sent it tumbling into the chaos below. Mump despised their childish antics almost as much as he despised the diseased troops under his command. 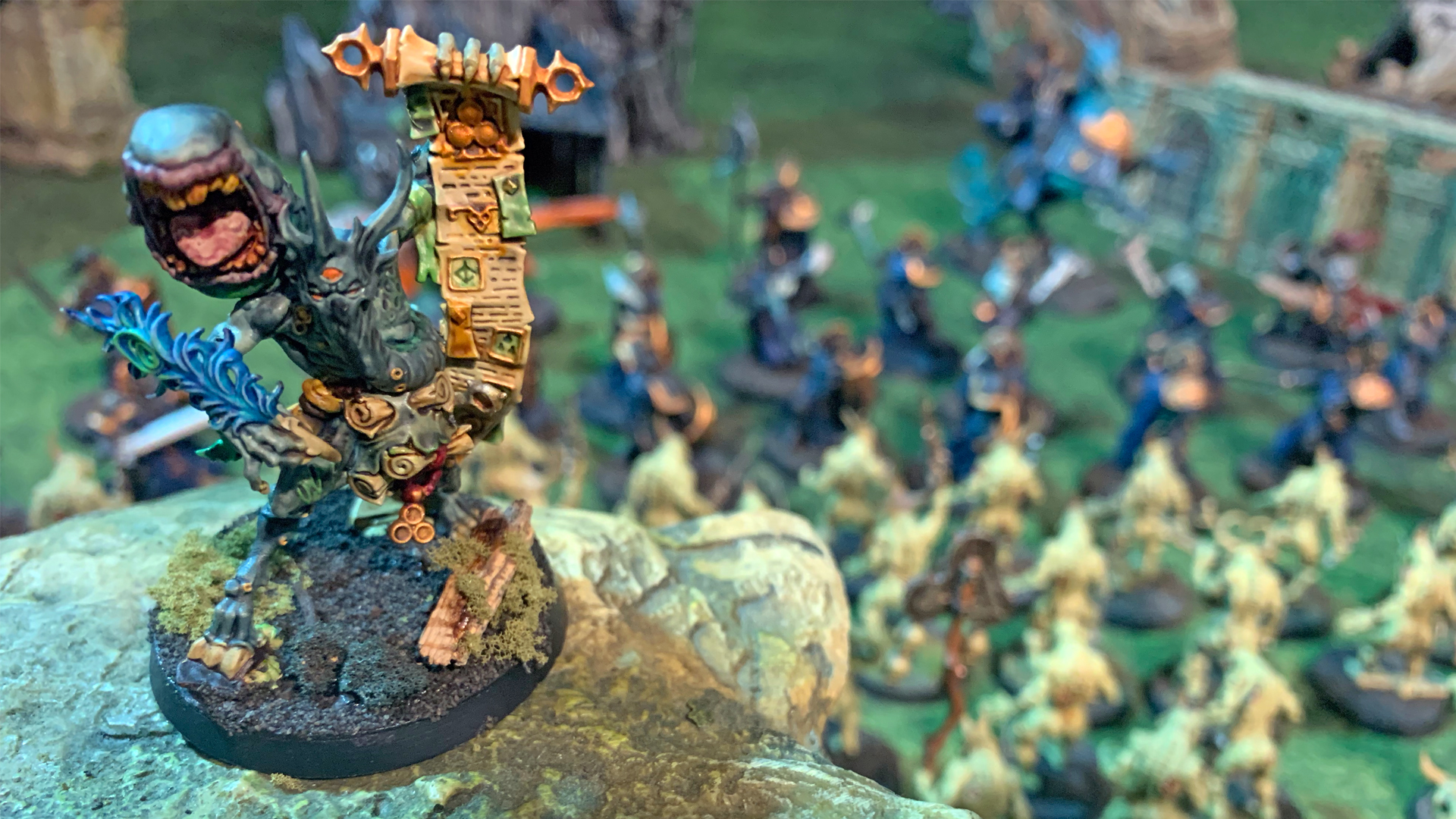 Stepping a few feet away from his vantage point, he watched as the ground near him began to write and split like an infested wound. Cautiously, like a spider emerging from an eye socket, the first roots of a Gnarlmaw began to creep outwards. “Oh good,” Mump complained to no one, “More things to count.”

With a sudden blast of wind and storm, a group of Plaguebearers were sent flying through the air, spraying friend and foe alike with their blessed bile and blood. Mump made careful note of the demons that did not survive the attack, all but ignoring the thunderous wizard that had caused it. Failing in battle was still failing, after all, and it was his duty to record all of it.

Glancing down, the roots of the fetid tree had begun to twist upwards, forming the husk of a trunk. Several Nurglings now danced around the pustulant plant, grabbing at it’s rusted bells. Mump briefly considered kicking the lot of them off of his hill, but decided the effort would be slightly more unbearable than simply ignoring them. Besides, he had much more important things to worry about, as the final column of armored warriors seemed to crumple in front of him. Even as their armor rotted and rusted with a dozen plagues, their bodies turned to lightning.

“Fools!” Mump bellowed, though none were sure which side of the conflict he was speaking to. “Ignorance of the gifts of Grandfather is no excuse! Start counting again!”

Something crawled across his foot. Mump glanced down, shoving the Nurgling aside. “Go away you worthless…” His insult trailed off as a familiar, haunting sound wafted up the hill. As soon as he heard it, the Nurglings around him, who had grown in number to at least fourteen, began to cheer unanimously.

As if in response, a single, wet, flatulent note assaulted his ears.

Summoning every last bit of foul wind in his festering lungs, Bactoth Biletooth pressed the bone mouthpiece of his gutpipe to his crust-flecked lips and blew. The sound that emerged was beautiful to his ears, a long, winding expelling of musical gas that sprayed phlegm into the air behind him. Happily, he trotted towards the top of the hill, a small pack of chortling Nurglings dancing along behind him. Hopping lightly across the mangled corpse of some large reptile, he landed sloppily beside his best friend.

“And I hate you.” The Scriviner tried his best to ignore the new arrival, scribbling with his ridiculous featherpen onto a sheet of paper.

Bactoth always thought that the elder demon took his work too seriously, and delighted in sneakily adding crude sketches to his scroll. Mump always covered up the posteriors and genitals he drew, but that never dissuaded the Bilepiper.

For a brief moment, the Scriviner looked as if he might swing his distended jaw around and bite the Bilepiper in half, but he just sighed and continued his observations. A wonderful case of the Ghyran Suffocitus had turned the skin of Mump a dark blue; a feature that Bactoth wasted no time in working into all of his limericks. 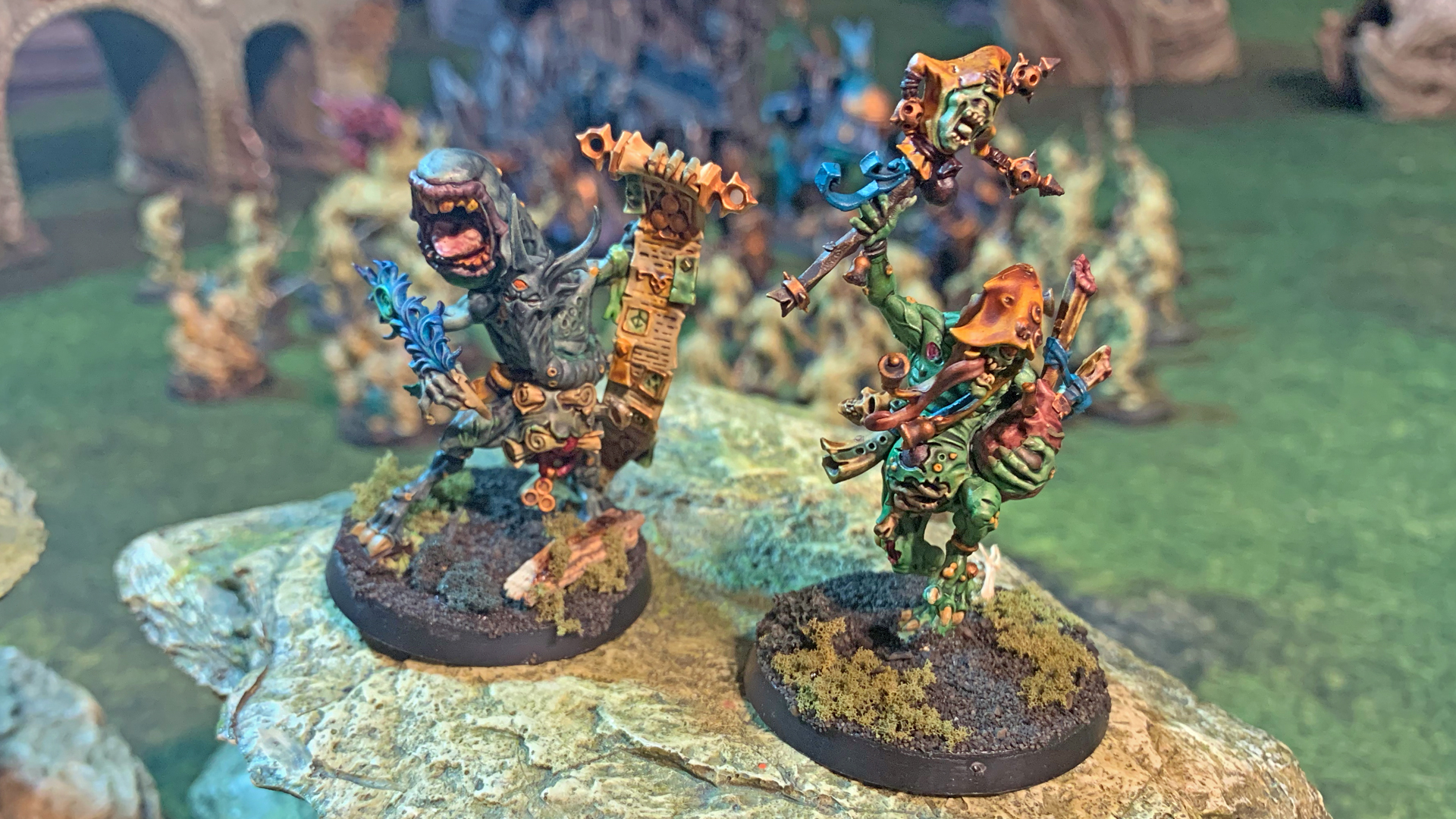 Finally, the Scriviner turned his head to face Bactoth, letting out an exasperated groan. He pointed down at the remaining enemy warriors who had formed a circle around a duo of spellcasters, their shield wall all but impenetrable to the Plaguebearers beating at them.

“Take your stupid horde down there and break that wall or I’ll break it with your corpse.”

“You always say the nicest things!” Bactoth pranced down the gore-slick slope, letting out a few quick bursts from his bilepipes. Cheerfully, the pack of Nurglings followed, tumbling through the mire of broken bodies and assembling makeshift weapons from broken bone and bent metal. As he approached the stagnant pile of Plaguebearers, he choked out a single, rancid blat from his instrument. Eagerly, the Nurglings surrounded him, now in a swarm of several dozen. Bactoth cleared his throat, spat out a ball of blue-red phlegm, and began to sing loudly and discordiantly:

Poxes, plagues, and disease too,

Grandfather has these gifts for you,

Bile and pus and weeping sores,

Laugh your lungs out on the floor! 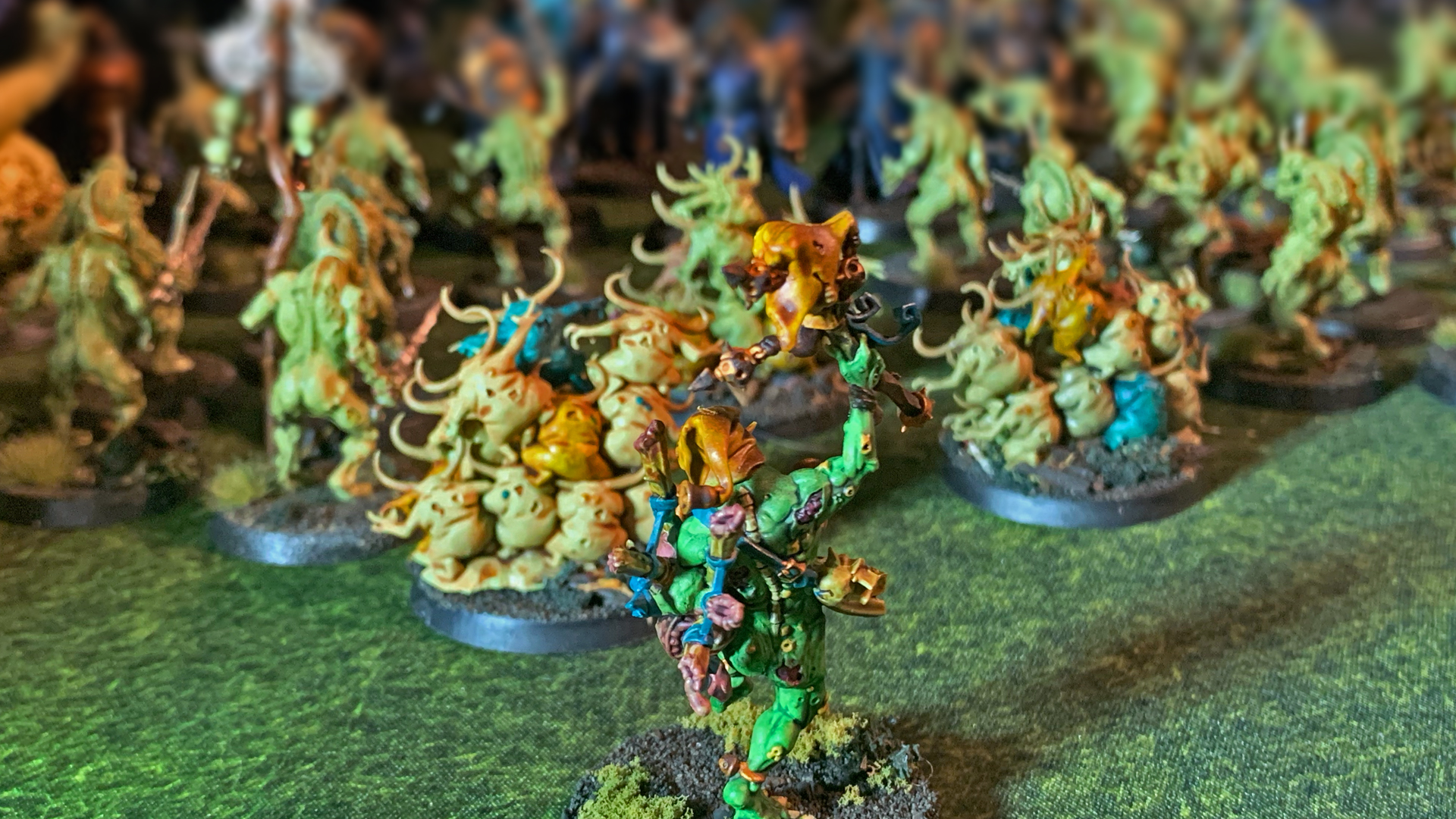 With tiny applause, the Nurglings at his feet began to swirl in a circle around him. Wisely, the Plaguebearers directly between him and the shield wall moved to the side, less they also be subsumed by the tide of claws and teeth. With another putrescent note, the miniscule horde surged forward, quickly clambering under the legs and shields of the defenders. He heard a surprised series of yells come from behind the wall, and within an instant, several streaks of lightning burst into the clouded sky. Their magical protection fading, the defenders fell inward, crushed under the weight of the Plaguebearer’s advance.

Bactoth turned and gleefully waved at Mump, who responded with a particularly offensive gesture the two had learned while in Ghur.