This article is the third part of a narrative hobby series organized by Giga-Bites Cafe. Click here to join in!

The trundling horde of Plaguebearers clogged the narrow ravine like an impacted colon. From a distance, the sea of sickly green and yellow bodies looked more like sludge, desperately fighting against gravity to burst forth into the ruins below. But still, the defenders of Sigmar’s vault held, breaking push after push with glowing azyrite shields.

“We are not getting through this way, not in time,” Mump glowered at the demons in front of him, each trying in to push their brethren through with little concern for their own safety. Thunderous blasts emanated from the narrow pass, a good mile from where Mump stood, and he smelled the scent of burnt rancid flesh wash over him. Somehow, Sigmar’s chosen had held this pass for three days; a full week after the last citizen of Baystorm had vomited up their intestines at his feet. That victory was meaningless to Mump; the real goal was always the Stormvault, even if only a few demons knew it. He angrily shoved at the Plaguebearers in front of him, though they had little room to move. “Keep pressing! One of you will break through!”

He knew that this was a lie; Sigmar’s lightning golems had been preparing this defense from the minute they fled the battlefield. Mump took a small bit of pleasure in the fact that their apparent retreat was the last thing most of the mortal citizens saw through clouded eyes. Many of those same mortals now joined the ranks behind him, having seen the cowardice of their false god and sworn themselves to Grandfather in the throes of his gifts. The additional forces were a welcome surprise, after all, they were someone else’s problem.

As if in response to his thought, he heard a wet, phlegmy roar from inside the city walls. Most of the mortal structures were now covered in beautiful gnarlmaw roots, blooming into glorious colors of rot and disease. The passageway from the city streets to the once-hidden vault entrance was caked with the gore of it’s last defenders. Chortling groups of Nurglings tossed bits of bone and meat between them, totally ignorant of the ongoing battle. The roar repeated itself, much closer now, and for a moment each Nurgling froze. Mump knew this sound, and while it meant doom for the remaining defenders of Baystorm, for him it meant a relief of command.

Morbidex Twiceborn strode forth from the verdant ruins, his pox maggoth Tripletongue easily dwarfing the throng of mortal worshippers that encircled him. Piles of Nurglings churned and lurched forward at his feet, their incessant chattering at such a volume that Mump briefly considered throwing himself into the front lines just to be rid of it. “At least it’s almost done with,” he sighed to no one in particular.

Morbidex paused slightly at the sight of the Scriviner, notting his bulbous horned head in the direction of the demon. Mump responded in turn, then began exchanging his current scroll for a lesser-used one kept securely lodged in his intestines. Recording the victories of Morbidex was not part of his charge, but he saw no reason why even the great Maggoth Lord should not be appropriately tallied…from a safe distance, of course.

With a sudden burst of speed, Tripletongue left forward, shoving aside demon and mortal alike as it bounded towards the defender’s position. Followed by a tide of Nurglings that swept into the ravine like a rancid river, the champion of Nurgle smashed his way to the front of the line. Overwhelmed by the sheer force of his charge, the remaining warriors of Sigmar were forced back; just the advantage that Mump had been waiting for. Summoning forth all of the volume he could, he began to shout orders again, urging the horde forward into the fray. 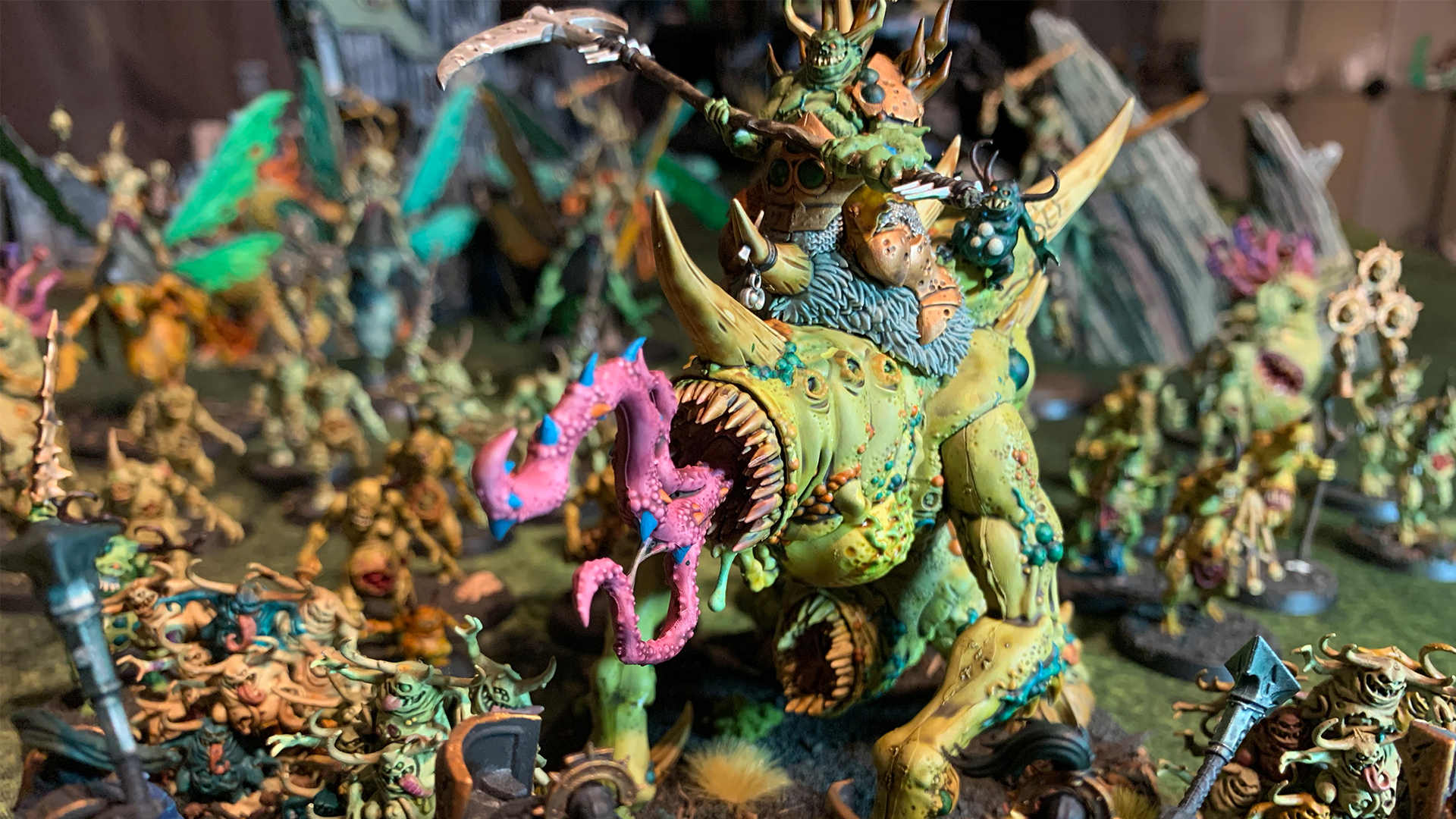 Enemy maces, glowing with cursed lightning, struck back at Morbidex, but their weapons sank into Tripletongue’s fleshy blubber. Spurring the maggoth forward, Morbidex readied his scythe and struck deep into the armor of one of the golems, the rusted blade easily ripping through Sigmarite steel. Rent nearly in half, the chosen fell backwards, erupting simultaneously into a shower of rancid gore and a bolt of white lightning that streaked into the sky. Laughing heartily, Morbidex swung again and again, each time his scythe severing arms and heads from torsos. As he wounded the stalwart defenders, the Nurglings at his feet would envelop them quickly, pulling them to the ground in a tide of razor teeth and claws. Whereas the line of Sigmar’s chosen had held for three days, it now fell in a matter of minutes.

As the last bolt of soul bound lightning lit up the haze of insects and fog, Mump knew the vault was theirs to claim.