Let’s just skip to October already and get spooky!

The Nighthaunt are one of the most flexible factions available in Age of Sigmar, able to be played as a variety of different styles. This week, we’re looking at how to tie up your opponent with a horde of ghosts that will just not stop coming back.

This lists uses three (!) battalions, which I’ll let speak for themselves. 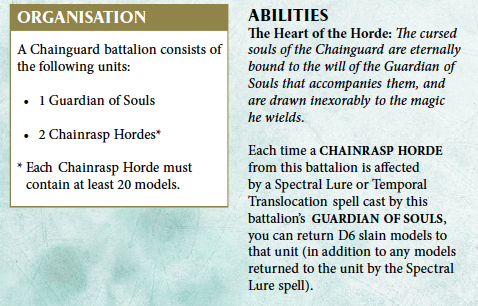 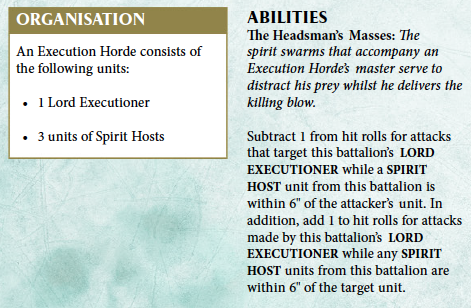 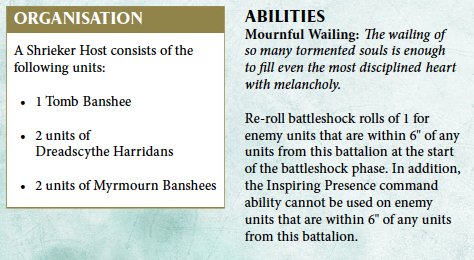 Guardian of Souls – Your general for this list, this spooky fellow is key for keeping your Chainrasp legions at full power. He helps a little by providing all Nighthaunt wholly within 12″ a +1 to wound, but the real trick comes from the battalion and spell combination. On a successful cast, you’ll be restoring 2D3+3 Chainrasp models to a unit each turn. This basically means that, unless your opponent can target him for deletion, they’ll have to try and wipe out the entire unit in one go. While not impossible, it’ll certainly slow down most other factions, giving your spooky buds plenty of time to hold objectives.

Tomb Banshee – Mainly here for the battalion, she’s also sporting the Pendant of the Fell Wing, which adds 3″ to normal moves of any units within 12″ of her. Use this to get your other banshees into dispel range (bumping their move to an impressive 11″), or just to get a little more speed out of your hordes. Her scream attack, while defendant on your opponents bravery, can be horrifying if aimed at something like Skaven or Gitz. Don’t forget that it looks for their current Bravery, not unmodified, so all those nice Nighthaunt debuts help land a few more wounds.

Lord Executioner – With good positioning, you’ll be using this ghastly chap and his entourage of Spirit Hosts to lock down big enemy heroes like Mawcrushas or Thundertusks. If they try to kill him, they’ll take a -2 to hit, and if they try to chew through the Spirit Hosts first, they better hope they’ve got some decent range. His artifact, Slitter, lets you pick a unit within 1″ and roll a dice when you select the Executioner to fight. If you roll higher than the models wounds characteristic, they are slain, helping to eliminate pesky netters or banner men.

Chainrasp Horde – There isn’t much to say about them except that they still remain one of the better horde units in the game, especially when backed up by constant regeneration. Ideally, you’ll sandwich the Guardian of Souls between the two hordes; whichever your opponent tries to kill, you’ll heal back while having the second unit take its place.

Dreadscythe Harridans – An often overlooked unit, they act as both a blender and debuff unit in this list. If you’re fighting something with low bravery, let them get within 3″ to give ALL enemy models in range -1 to hit, helping keep your giant horde around even longer.

Mymourn Banshees – In today’s magic-heavy world, who couldn’t use a few extra dispels? Not only will they eat your opponent’s endless spells, they’ll get stronger while doing it. Plus, a baseline combat profile of 1/4+/3+/-2/D3 is going to wreck an unassuming hero who thinks these ladies are just there to gobble spells.

Spirit Hosts – Spirit Hosts have two big things going for them; one, they are one of the few non-hero Nighthaunt models with more than a single wound, so even a pack of three is difficult to unseat. Second. they have relatively large bases, making them the perfect roadblock to hold off fast movers. While they likely won’t do much damage, their job is to hold down a hero long enough for your Lord Executioner to swoop in and deliver the killing blow.

The name of the game here is to swarm and hold objectives, forcing your opponent to try and chew through lots of spaced out models. With the entire list being a 3-drop, you’ll likely go first as well, allowing you to move in quickly. Against heavy shooting armies or very slow ones, don’t forget that your troops can deploy off-table as well; this protects them from being shot off in one turn, and also lets you pin slower factions closer to their starting point. And finally, if things start to tip in your opponents favor, use the Spectral Summons command ability to either pull in more defenders, or simply give your general an easy escape route.