Sadly, week 1 of the Great Reawakening league found me playing my spooders in gray plastic with poster putty holding them together…. 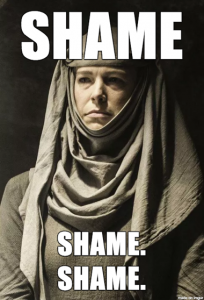 Why would Juice, the painting guy, be playing a gray army? Because I’m painting other armies.

This blog takes a look at the most forgotten army in Age of Sigmar.

They got a book…

A long time ago.

This army is so forgotten, the book is a PDF only on Forge World.

Say hello to the Legion of Azgorh, aka Chaos Dwarfs. 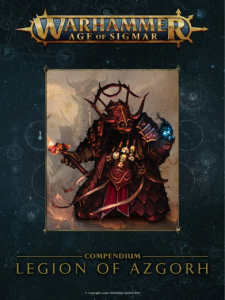 This army that is only available through Forge World. They shoot like some dwarfs wish they could. If your army flies, may Sigmar help you.

Starting off, the only request for this army was that I not use the standard red, black, and gold color scheme. So, after throwing a few color options out, I was directed to use an emerald as their primary color and to use it wherever I could.

Chaos Dwarfs use the Infernal Guard for line troops. Like all line troops, they’re small and you have to paint a bunch of them. Going too far into the small details on these is a trap that can suck up a ton of your hobby time and crush your motivation. Finding that happy medium of speed and overall looks is the trick. Here’s how I tried to balance it all out.

With all the rain in Georgia, I went with Vallejo black airbrush primer for 10 models. As the majority hold their rifles in front of them and the helmet leads to tight quarters, I used poster putty to hold on the arms and head. I let them sit overnight, but that’s just a me thing.

A little Wraithbone across the trim and wraps primed the up the areas where I was planning to use Snakebite Leather . (If you haven’t used any of the Contrast paints and are thinking about, get his one. It is my favorite Contrast paint.) 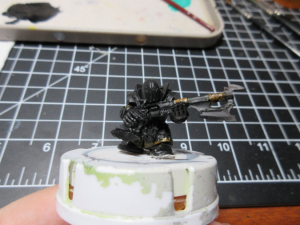 Once the Snakebite Leather was down, I used Vallejo Metal Color Steel to hit the plate armor that covers the majority of the model. I also used Steel on blades on his weapon and his boots. It’s a dark metallic and works really well for an army that is supposed to be covered in ash. 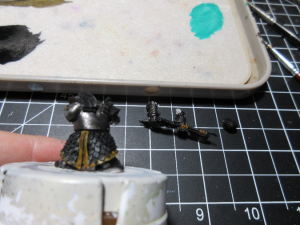 To keep this army from becoming a plate mail blob, I went with P3’s Blighted Gold. I painted the scale mail and trim. I also picked a helmet detail on this model to add a little variety. As the beard would be mostly covered, I just hit the braid holders. (The heroes and units with the beard more visible will get extra attention there.) I also put a little of the gold on the rifle to break up the lines on it. 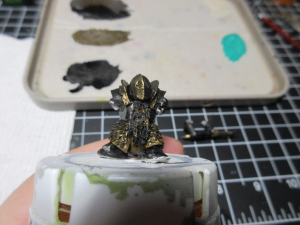 A little Vallejo Metal Color Gunmetal completed the receiver of the rifle. While it doesn’t show very well in the photo, it is a darker and more bluish metallic paint that is closer to blued metal than the steel. 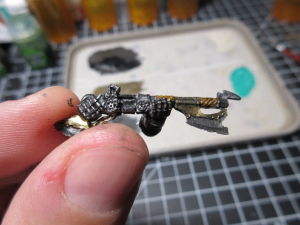 Finding the correct Emerald color proved to be a trick. I finally found that P3’s Eldritch was a good base coat. This did require a couple of coats with the Eldritch to cover that black primer. With this model, half of the helmet was also done to add more of the Emerald. 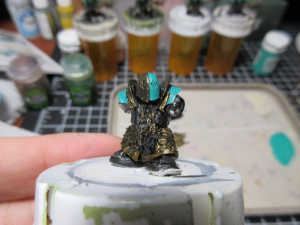 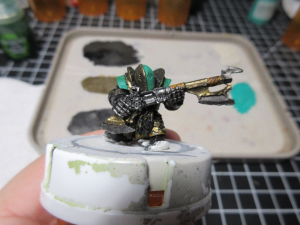 This might seem a little basic, but remember, these are line troops. You’ll be painting many, many, so very many of these and spending a week on each is usually not an option.

Base the units in a consistent way with the rest of the army and you’re off to a good start.

Six down, four to go.

Maybe then I can get to my Spooders. 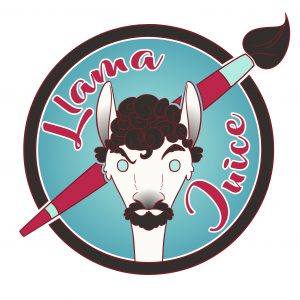