We’re taking a look at a fast, punchy way to play Slaves to Darkness at the Vanguard (1k) level.

With the release of the latest Slaves to Darkness battletome, the hordes of Chaos run rampant across the realms once again. And what better way to celebrate than by leading an all-mounted force designed to crush your opponent before they have a chance to blink?

As soon as I saw the new sculpts for Chaos Knights, I knew I wanted to run as many of them as possible, and while the battalion is a little pricy at 140 pts, it does allow you to make the army one drop. The additional impact damage is another great reason to bring this, as your focus will be on hitting things as hard as possible on the charge. While you’ll miss out on the additional artifact due to only having one hero on the board, the extra command point will prove invaluable to your plan.

The biggest ‘trick’ with this battalion is to remember that you don’t have to damage the unit you intend on attacking, and with all these big bases you can set up some tricky attacks, especially if your opponent left a hero or support unit too close to the front lines.

Sure, he may look somewhat out of place amongst the Knights (what with being smaller, and also standing perfectly still) but this guy is still worth his weight. Giving him the mark of Khorne (reroll hits of 1 and add 1 to wound rolls) over the mark of Slaanesh (6’s turn into 2 hits, and reroll run and charge) might seem counterintuitive to a list built on the charge, his command ability more than makes up for this, letting a unit within 18″ reroll charges AND giving +1 to hit. This is why the extra command point is so valuable! Once your initial slaughter is done, you’ll need something to make the Knight lances a little better in the long game, and Khorne is where it’s at. Don’t be afraid to throw this guy into combat also, as Master of Deception will protect him in melee, and his Helm of the Oppressor throws out a nice 6-inch -1 bravery bubble, which stacks with your Knights and can help peel off a few more enemy models at the end of the turn.

These are your main troops, obviously, and at first only having 15 might seem not enough bodies to control the game. However, your goal with these isn’t to hold objectives, but to smash into your opponent again and again. Thanks to the battalion, after each charge you’ll likely deal D3 mortal wounds to a unit within 1″. Charging also bumps their lance profile to 2″/2/4+/3+/-2/2, which in itself doesn’t seem like that great of a bonus. However, with the rerolls granted by the Chaos Lord, that means you’ll be wounding on a 2+ and rerolling hits of 1, giving you a better chance at landing the first brutal attack. Be sure to mod on a Hornblower for the +1 run and charge rolls; this also helps when you retreat to set up another charge. Retreating a wounded unit to allow another one to deal impact damage is a great tactic, and with the high movement of this unit, you can easily retreat onto an objective.

This chariot is a wrecking ball you aim into the biggest cluster of units possible. After a charge, on a 2+ it deals D3 mortal wounds to EACH enemy unit within 1″. Adding in the additional D3 from the battalion to a single target and this little guy will pay for himself on the first charge. He’s a little slower than your Knights, and lacks an intrinsic way to improve his run/charge rolls, so you’ll likely end up driving this into a big pile and letting it fight until it dies. In a 1k game, dealing 2D3 damage to a target and then a possible 12 more from the attack profile can swing the battle in your favor instantly.

Run forward, hit stuff, retreat and do it again. You’ll want to avoid any long-term fights with your Knights, as their big value is on the charge. Use one block of knights to engage one side of a target, then retreat them to attack the other side with another block.

While having only one Hero means you won’t get to use part of the Ravagers ability, you’ll still get to summon in either 10 Chaos Marauders, 5 Chaos Marauder Horsemen, or 1 Cultist unit of up to 10 models. Given that the biggest weakness this list has is it’s low model count, the Iron Golems make an excellent choice, as they love to sit around on an objective. You don’t have to declare which unit you’ll bring in until you actually summon it, which gives you a little more freedom, but you’ll likely need the body count more than an additional 5 horses. 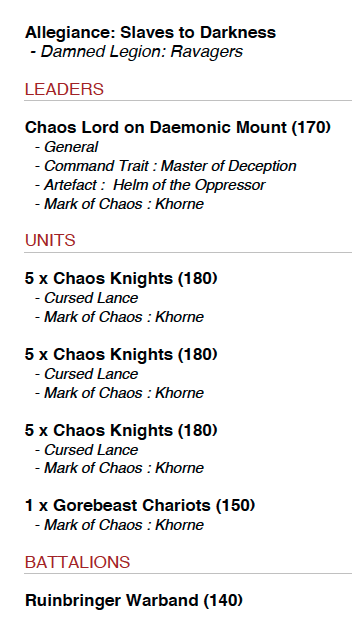