Painting for Tabletop – Dr. Strangebone or How I Primed in Black and Still Painted the Bone

So sooner or later it happens to everybody. You have a project that you want to start working on. You plan out your colors and your scheme. You piece the model together and clean off all the mold lines.

Then it hits you…

I’ve only got black primer.

Now you could do the rational thing and go get some lighter primer or wait till Amazon could deliver it.  You could do as I’ve done and take it as a personal mission from Sigmar to go ahead and paint a lite colored bone over that black.   (…but really I just wanted to do the black stonework and didn’t realize how many bones covered this model. Ooops.) 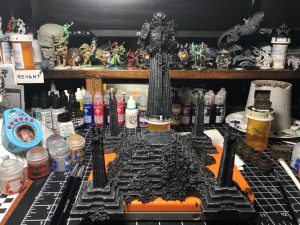 Now you could go the Saint Duncan route.  You could try to put multiple thin coats of Morghast Bone over the black and rock on with your day. The problem with this is, how many coats do you want to do? If you’re thinning the paint out enough so you don’t get brush strokes, this could take a while. Just for giggles, I painted a small section like this. Below is a picture of this after 3 passes… I don’t know how many more I would have had to apply to get full coverage. 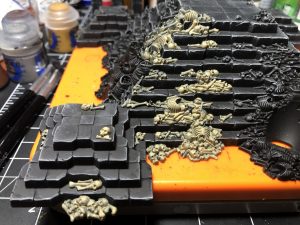 Instead of reenacting a painting version of Groundhog Day, I went back to an old trick. I had seen Dallas Kemp do this in one of his older tutorials. I dug into the paint bag until I found P3’s Thornwood Green. I know. It doesn’t make a lot of sense, it’s another dark color. Hang in there and trust me on this one.

I laid down a base coat of the Thornwood Green over the bone. It doesn’t have to be a hundred percent covered. Just as long as you get coverage, it will work. 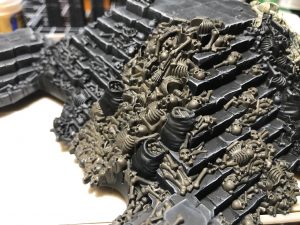 Once the green dries, proceed as normal with your bone recipe. I decided to go with Morghast Bone for the base. Even thinned, the bone color went down in one coat. Granted, there were spots that I had to touch up, but this was nothing compared to the multiple coats I had applied earlier. With minor touchups, that single coat looks much fuller than the three coats straight over black primer. 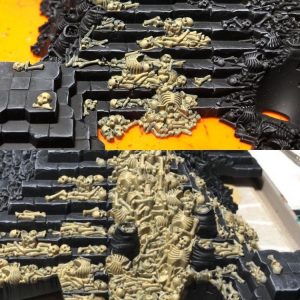 Once I was happy with the coverage, I added Seraphim Sepia to dark line and weather the bones. 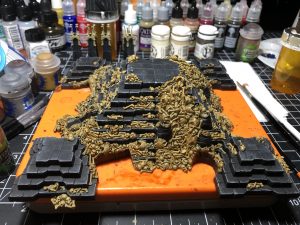 The next color I went with was Ushabti Bone. It isn’t the lightest bone color but it’s considerably lighter than Sepia shaded Morghast. You can either drybrush this on or paint it on to the raised parts of the bone. As I had already done the black stonework, I choose to brush it on. 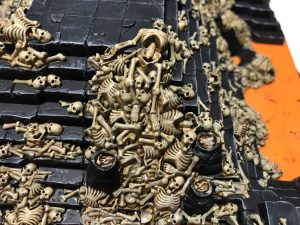 You could stop there but I wanted brighter skeletons on my nexus. A thinned Wraithbone went back to the higher points of bone that needed additional highlights. 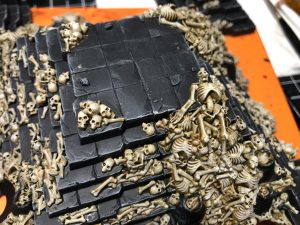 Once you paint up the bags, barrels, and chests, the Bonetithe Nexus base is complete. 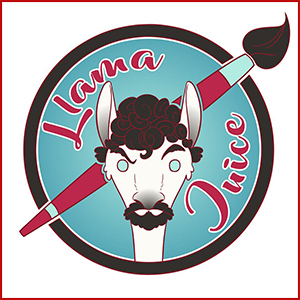