If there’s one thing I’m good at in this wide world of Warhammer hobbling, it’s starting projects. That and making up an elaborate backstory for a hero while simultaneously forgetting they have an artifact for turns 1-3.

If there’s one thing I’m bad at (you know, besides winning) it’s actually finishing these projects. My shelves are lined with half-painted list ideas, table ready as long as you don’t look too closely. To say nothing of the shame shelf, packed with potential for at least a dozen new list configurations, each waiting for the day I decide to just not paint another ten skeletons. I’m the king of meticulously working on a test model for a new force, and then becoming discouraged when I realize I have to do that same effort 80 more times.

In short, if GW ever releases a procrastination faction, I’ll be first in line to put it off.

So this year, I’m holding myself accountable, and doing so in a public place so that if I don’t meet my goal, everyone can parade me around for a bit ringing a bell and hurling fruit. And appropriately enough for the season, I’m tackling a list I’ve had kicking around in my head (and Azyr, when it DOESN’T DELETE ALL MY LISTS EVERY UPDATE) for a while now. In fact, it’s a list I’ve actually been working on for so long, the army got a brand new book, and I STILL didn’t finish it.

That list used to be called Too Many Bonesplitterz, but now I’m just calling it So Stupid it Might Actually Work. It’s 229 wounds of pantsless, screaming Orruk.

But Zack, you say, aren’t there better ways to run Bonesplitterz? To which I would respond, if I could hear you, yes there are. I’ve got six Big Stabbas, another 30-50 boar riders, and a few of each hero also taking up shelf space, and eventually, they’ll hit the paint table as well. But the point of this list isn’t necessarily to meta-chase, or do any interesting tricks, or really win at all. It’s about putting 113 models in the way of at least 2/3 of the objectives on turn one while rolling buckets of dice. Sure, they don’t have much of a save, but years of playing Death has trained me to roll a 6+ shrug like no ones business. And who needs damage output when you’ve got the ability to stand in the way? Good luck taking an objective when there’s physically no more space on the table.

Fortunately for me, all of the models area already built. Unfortunately, half of them are rescues that will require some stripping before I can get started, having apparently been base coated with green clay at some point in their poor lives. 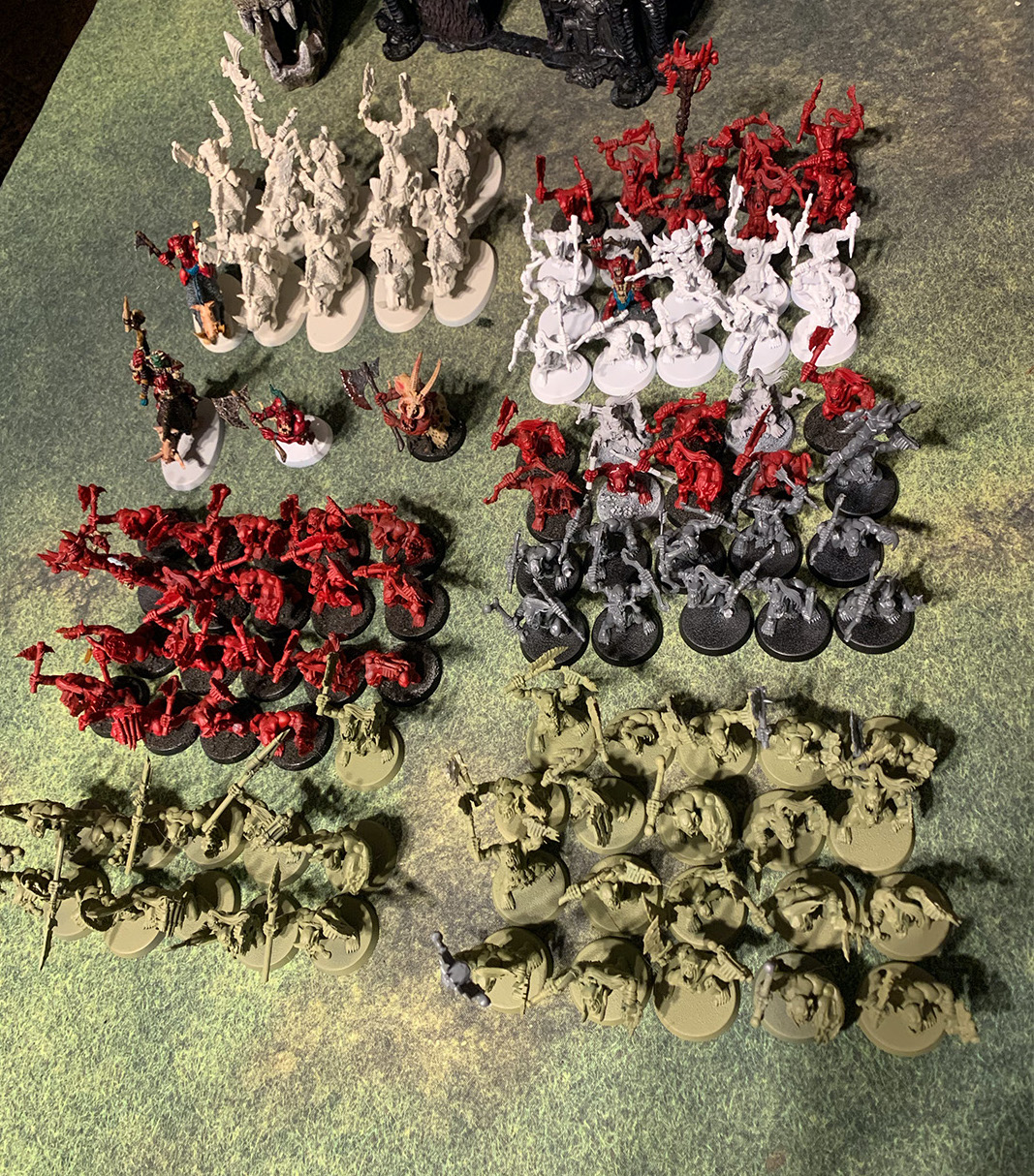 After doing some minor surgery to make sure each unit would have the right number of musicians and banners (and the correct weapon) I challenged myself to speed paint a few models. Mostly, I wanted to make sure this was even physically possible before declaring to the world that I would do it. Combined, these two models took me about an hour and a half each, and most of that was waiting for paint to dry. 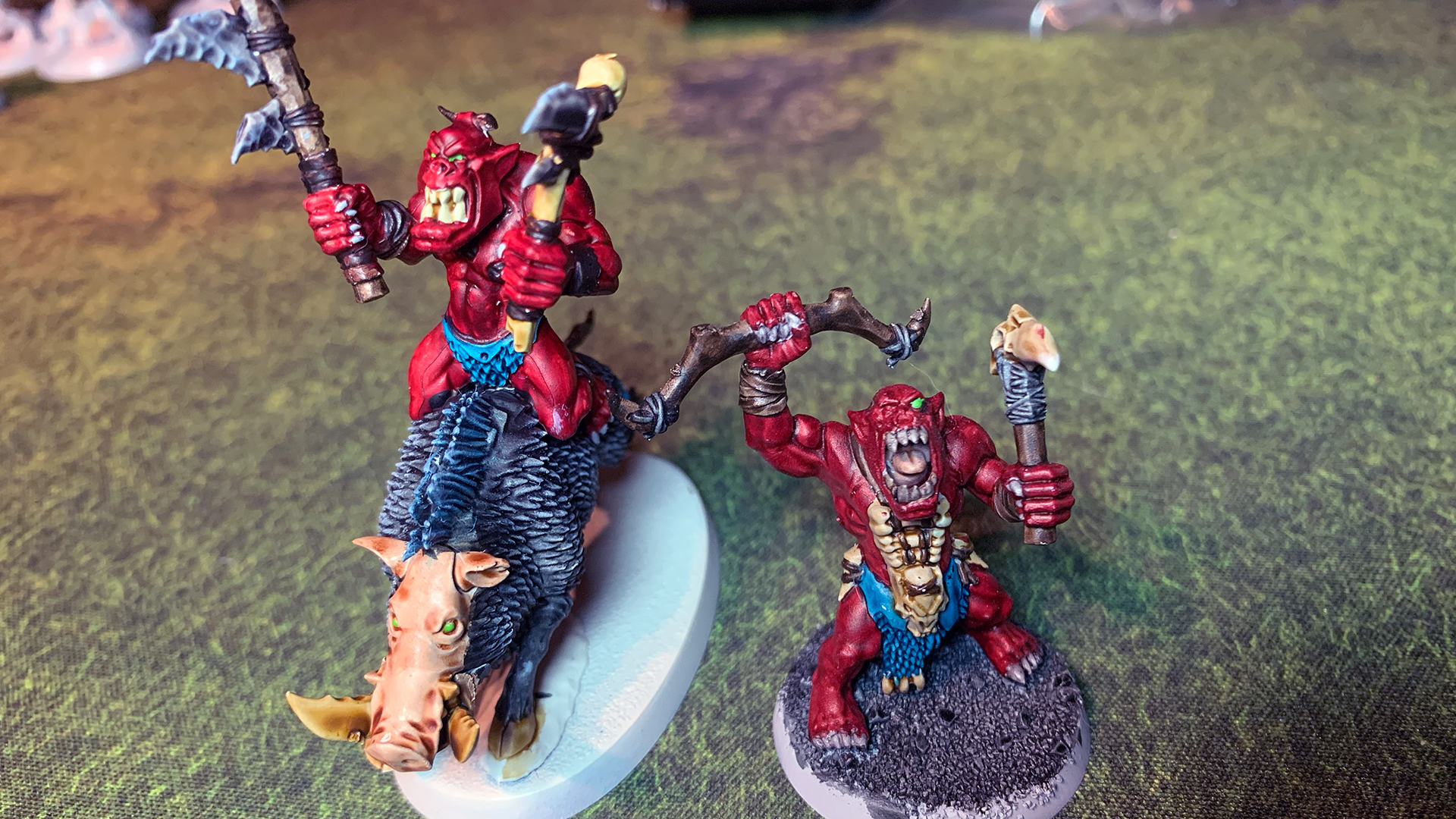 Have I mentioned how much I love contrast paint? It feels like it was specifically designed for this sort of project. And sure, the two boyz up there aren’t at a level I’d like them to be yet, but I wouldn’t be embarrassed to have them on the table, once I add some sweet tattoos and scars. I’m going to keep the basing simple as well, what with so many models and the fact that they take up a good portion of the base itself with their wide, “Come at Me Bro” stances.