Are you unsatisfied with the current apocalypse? Harken back to a simpler time with this List of the Week!
This week, we’re dragging our feet and hunting for brains with a massive zombie list, perfect for narrative games.

For the maximum amount of zombie-whipping fun (stay with me) we’ll be taking the Legion of Sacrament from the Legions of Nagash allegiance. This grants us the usual Gravesite locations, but also gives us a nice ability in The Master’s Teachings, giving you the chance to bring back an entirely destroyed unit on a 4+. The Legion of Sacrament also gives all of our Necromancer heroes +1 to cast, which is pretty important.

Necromancer – These are the most important part of the list, obviously. With all the endless spells you have, plus the still-solid Lore of the Dead selection, you’ll have plenty of options in the Hero phase. You really can’t go wrong with any of the Lore spells, so flavor however you’d like. With at least a +2 to cast, you’ve got a better chance of triggering the Locus of Shyish ability as well. Stick them safely in a pile of undead and let them sling spells all day.

Corpse Cart – Corpse Carts come in two flavors; one debuts and hurts enemy wizards, and the other buffs spells and allows you to re-roll the dice that determines how many zombies you get back a turn. Both won’t survive a direct fight though, so be sure to keep them behind at least two rows of meaty dead. In a weird bit of synergy, they also give your dire wolves a +1 to save, as long as the doggies are within 9″ of the cart. That means that, later in the game, resurrecting a pile of dogs to act as a shield for your corpse cart isn’t a bad play.

Zombies – The real meat of the army is in its 120 zombies. At first, their war scroll looks like absolute trash, but their power comes from synergy. At a glance, their 1″/1/5+/5+/-/1 attack profile doesn’t look good.  However, at over 40 models, they add +2 to both hit and wound rolls. AND if they are within 9″ of a corpse cart, add an additional 1 to their hit rolls. Fire off a Danse Macarbe and watch this blob pile in and attack twice, swallowing every unit your opponent has on the table. 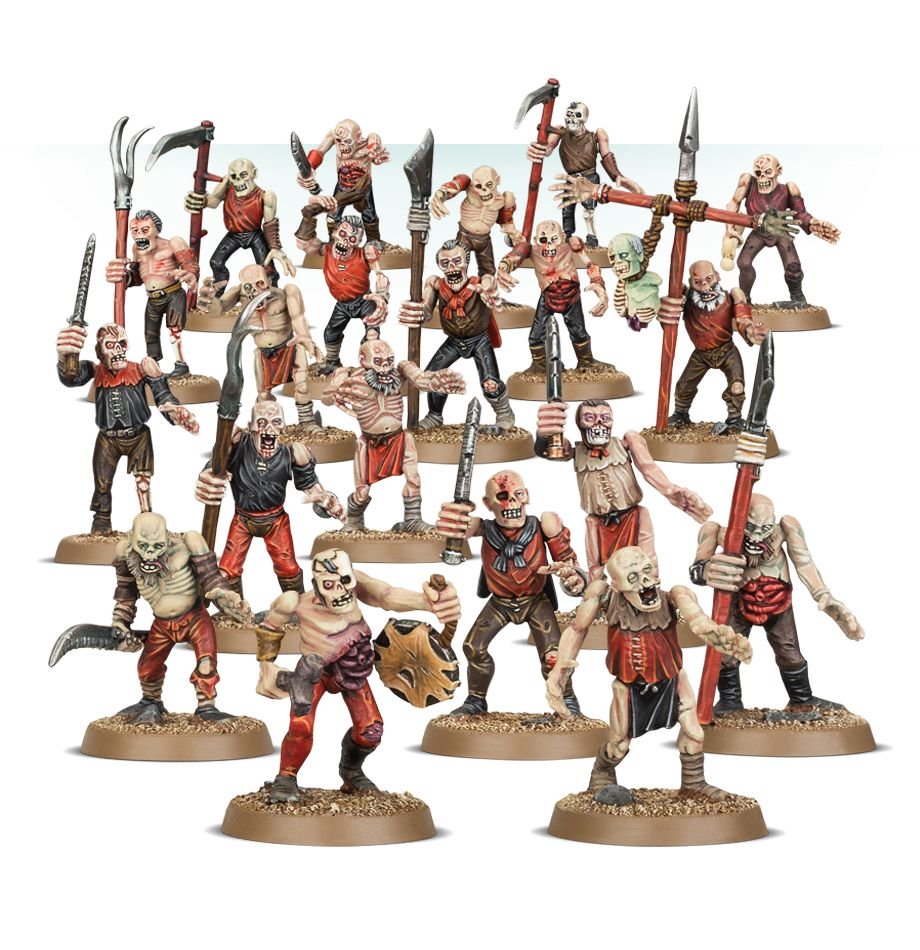 Dire Wolves – Any Legions player instantly knows what these are for. Dire wolves are fairly generic, but they’re fast and have 2 wounds each, meaning they can tie up units while your bigger horde gets into place. Keeping them into small packs helps make sure they can be brought back later, as well.

Zombie Dragon – Still technically a zombie! While this version is less powerful than the mounted one, it’s still a big, fast murder-machine that your opponent will have to deal with. And they will, taking pressure away from your squishy wizards.

Aethervoid Pendulum – The ultimate ‘fire and forget’ spell, especially if your opponent’s units are held fast by a pile of undead. Sure, you’ll lose a few corpsewalkers, but that’s a price you’re willing to pay. A particularly nasty trick is to have one necromancer unbind the spell, then another cast it, essentially letting you cut it back and forth across a target.

Prismatic Palisade – If this army has one weakness, it’s shooting. This handy forcefield will provide some extra cover for your necromancers. You can also use it to block a retreat or funnel your opponent into contact with one of your hordes. In a list thats almost entirely about controlling the free space on the board, this spell is a must. 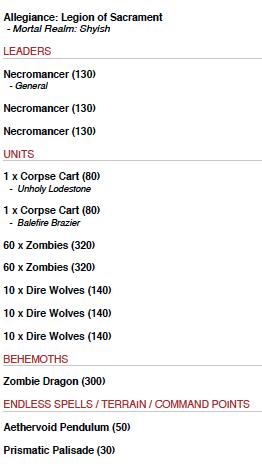