For this very special Valentine’s Day edition of the List of the Week, we’re snuggling up with the Maggotkin of Nurgle! Let’s spread Papa Nurgle’s love across the Mortal Realms in true goopy fashion.

The goal of this list is simple: get as many contagion points as possible, and swarm the board with demons of Nurgle. With the latest release of the Host abilities from the Wrath of the Everchosen book, Nurgle demons get a few new bonuses. Combined with Horticulous Slimux and his army of gardeners, you can deliver the gift of love (and disease) anywhere on the table! How considerate! 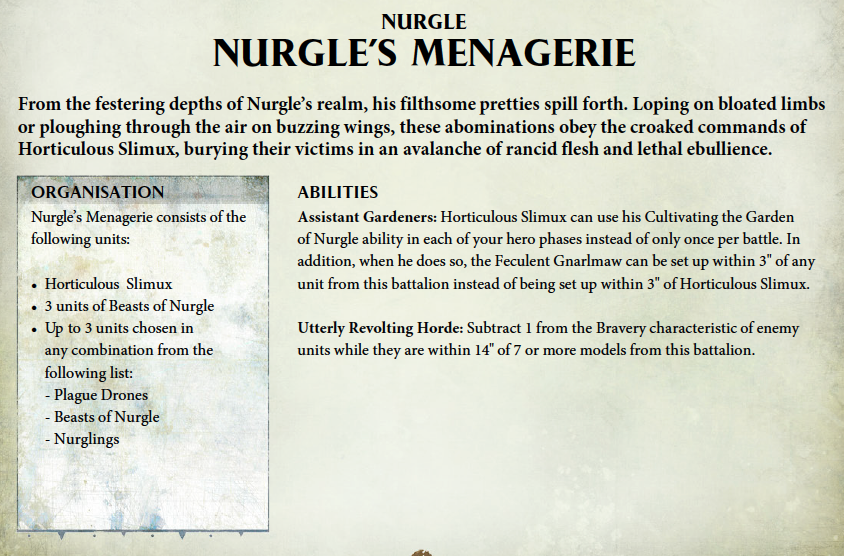 Nurgle’s Menagerie is a battalion that doesn’t see a lot of play, for a few reasons. One, it’s very expensive even by Nurgle standards, dropping in at 180pts. Secondly, it requires you to bring at least 3 Beasts of Nurgle; as much as I love their dumb little faces, they just aren’t top-tier by any means. And while we’re picking at it (Nurgle approves) the bravery debuf is going to be a rare bonus, if it ever occurs.

But you wont care, because you’re too busy planting trees. So, so many trees.

Each turn, you’ll be able to drop a Feculant Gnarlmaw (remember when Nurgle got a scenery piece first?) within 3″ of any model from this battalion, and more than 1″ from any other model or terrain feature. Yep, those are old ‘scenery deployment’ rules you’re looking at there, which if you’ll notice, don’t mention Objectives at all. Go on, plunk that Gnarlmaw right down on top of the point and block out half of the capture zone. Be sure to offer them a hug when your gross bell tree physically prevents their models from entering combat.

Don’t forget that you get a free tree at the start of the game, and you can also spend 7 contagion points to summon another one as well. However, summoning one this way requires it to also be outside of 9″ of any enemy unit, so you’ll likely find yourself using those contagion points for something else.

The main man that makes it all happen, Horticulous is integral to how this list works. So ideally, you’ll keep him far from any dangerous combat, shielded by a unit of Plaguebearers to keep Look Out Sir active as long as possible.

Both of these Heralds can provide healing to nearby units via their In Death There is Life ability, keeping those multi-wound models around another turn. They’re also solid fighters, and come with a spell that is technically unlimited range, as long as you have line of sight. For the one equipped with the Bountiful Swarm, try to position it near units with particular models that you want to pick out, such as banner bearers or those pesky Ossiarch Hekatos.

This little guy has two main jobs; one, he just needs to stay nearby the fight, as the Witherstave will help shut down exploding 6’s across the board. Secondly, hes going to grant your Plaguebearers rerolling ones, which helps this list do a little more damage up front. Hes terrible in a fight though, so be sure to nestle him deep inside the pestilent piles of demons you’ll be summoning.

There isn’t much to say about these guys besides that they’re one of the best tarpits out there (I’m not counting Pink Horrors because the goal here is to play a fun game, not frustrate your opponent into quitting). They’ve also got a built in defense against shooting, which helps them stand around on an objective longer. Use a tree to slingshot them into the middle of the board and enjoy dictating the flow of traffic for the rest of the game.

These gross dudes are ‘fast’ by Nurgle standards, but at 5 wounds each, you’re paying for staying power, not speed. Try to keep them within 7″ of one of your heroes to give them all +1 attacks, which really matters when it comes to their venomous sting (1/4+/3+/-1/D3).

Just look at their happy little dumb faces. Who doesn’t love slug dogs? Don’t expect much damage from them though, especially if they move outside 7″ of a Hero (which they should be, these are your prime tree-planters). They can also retreat/charge in the same turn, and doing so possibly damages every enemy in 3″. Throw two or three of these into a fight and enjoy making sure your opponent cant pile in properly between the bouncing Beasts.

You’ll ideally want to deep strike at least one unit of these in order to claim more contagion points. While they don’t even get the 5+ save that everything else has in this list, they DO heal any lost wounds at the end of the battleshock phase. That, plus the fact that each set is 12 wounds, can help them take objectives and hold it long enough for backup to ooze to them, and will certainly make your opponent guard their back line.

Prismatic Pallisade
While your Plaguebearers are plenty durable in a firefight, nothing much else in this army can survive a solid round of Kharadron Overlord shooting. Drop this mobile forcefield to protect your Heroes (especially Slimux) or, if you’re not concerned about bullets and arrows, use it to further block off board access to your opponent.

You’ll need, at minimum, five Gnarlmaws for this list to work at its best, though you could easily hit ten if you were some sort of insane person. The strategy is pretty simple and very Nurgle; plant trees and summon in even more demons until the entire board is covered in bodies. Don’t expect to kill a lot of models as your damage output, minus spells, is very low, but your durability is ridiculous. Also, don’t forget that Heralds can be summoned in just in case one gets sniped, though they’d obviously not have the same artifact/trait as the slain one.

Go forth and spread some goopy love! 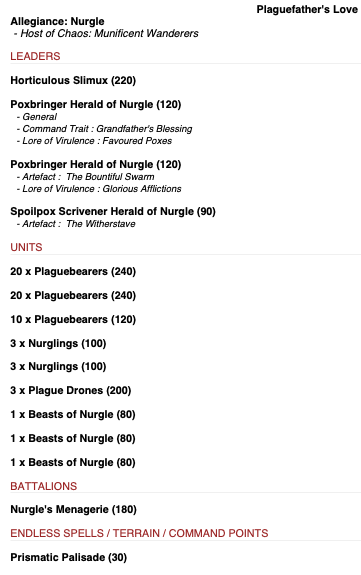