List of the Week – Don’t You Forget About Fish

A new AOS season is upon us! Changes are a-fin … rules, points, other stuff. Let’s revisit an older army, but one no less full of punch. We’re throwing down with the fish in this Idoneth Deepkin list of the week.

We’ve got two juicy battalions, which are here for your viewing pleasure.

The Royal Council is primarily there for movement, positioned correctly it can make any of your Ishlaen Guard have a movement of 17” or pump the Leviadon up to 15”. Mostly you’ll be using it to keep Soulscryer and Tidecaster with the King, but with it no one in your army will have a movement of less than 9” on a given turn.

The Akhelian Corps is for that once per phase reroll, which since we won’t have many models on the table, we’ll want to get the most out of every opportunity.

We also get a bunch of artefacts to throw on our heroes as well, and we have some good ones to choose from, but we’ll get to that in the hero section.

Akhelian King – Our general and a solid all-around unit. Drops mortal wounds on a 2+ after a successful charge, which also turns the damage characteristic to a 3 on the bladed polearm. Plus, we’ll get access to his command ability as the general for our turn 3 play … more on that in a bit as well. 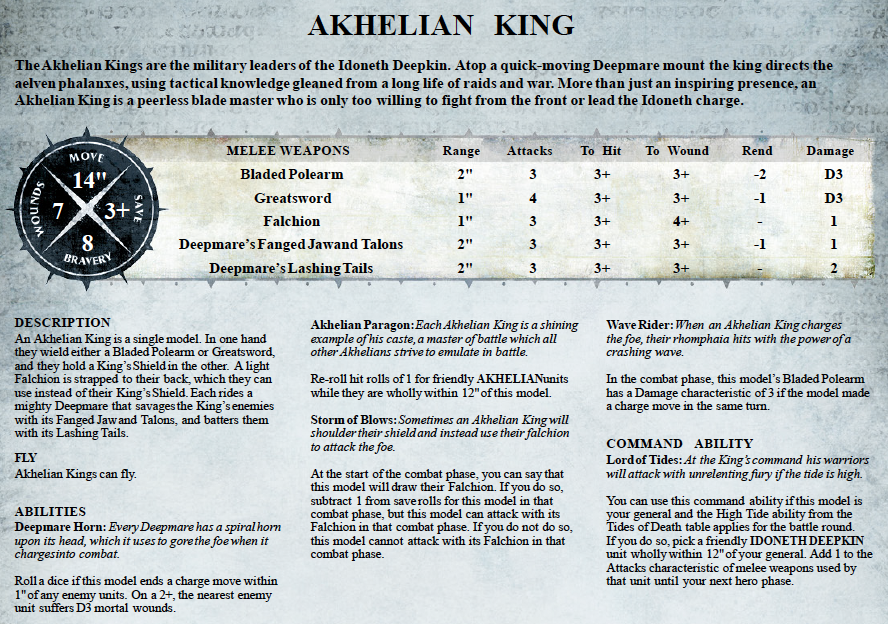 Isharann Soulscryer – Shoot from distance? He’s here to fill a battalion requirement. The Seeker of Souls ability is neat, but you probably won’t need it.

Isharann Tidecaster – Also fulfilling the battalion requirement, but in addition we get some nifty magic tricks to work with. Between the Riptide (on the warscroll) or Vorpal Maelstrom (magic we’re providing from the book) we have some magic that can put on a couple mortal wounds. And with the Arcane Pearl artefact he becomes surprisingly hardy by negating mortal wounds on a 5+. The Tidecaster also ignores the first wound allocated to it each turn if you do miss a roll. Just keep him out of the direct melee confrontation.

Eidolonn of Mathlann (Aspect of the Storm) – Oh buddy, here’s where we start bringing the thunder! The Fauthar, Spear of Repressed Fury has a 2” reach, 4 attacks, 3+/2+/-2/2 damage each. And coated in the Terrornight Venom we also get to reroll 1’s on the wounds. And on a charge we also reroll 1’s on the hits and add 1 to the damage, oh also we heal D3 wounds. Truly terrifying! 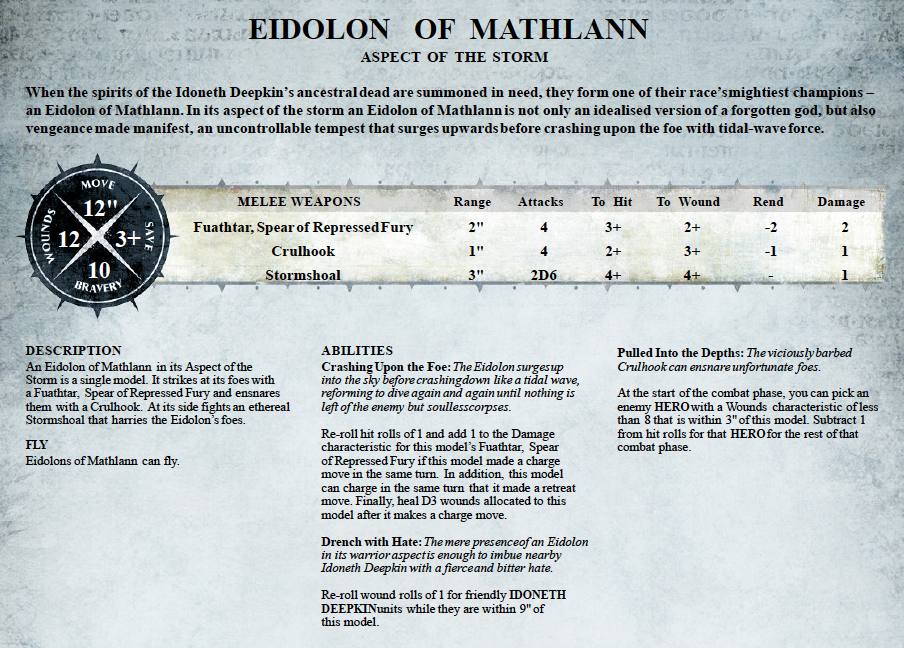 Akhelian Ishlaen Guard – I’m opting for the Ishlaen Guard here because they are hardier and cheaper than the electro-shock variety. They are also very capable of running around and capping points, which is their most important role in this army.

Akhelian Allopexes – Should I be running two sharks here? No. Do I care? Also no. Do I secretly wish I could run nothing but sharks? Yes.

Akhelian Leviadon – Here’s what I like about the giant turtle. It provides cover for your other units as long as they stay wholly within 12”, it has a surprisingly decent shooting attack, its profile doesn’t shift all that much when it takes wounds, and it’s not going to die on the first turn because Low Tide means it gets cover.

Gloomtide Shipwreck – Spooky ship does spooky things, I’m a fan of using this to funnel my opponent’s units into a particular area. The threat of taking mortal wounds from a spooky ship tends to steer people in a preferential direction.

Enclave FUETHAN – I’ve picked FUETHAN here for the reroll wound rolls of 1 for the mounts of FUETHAN units and since nearly everything in the army is on a mount it seemed prudent. The only drawback we’ll lose the Ebb Tide on the tide table as that will move to Flood Tide instead, but the Ebb Tide is highly specific, so it probably won’t affect too much flow of the battle.

Tides of Death Table – If you end up running an Idoneth Deepkin army you’ll need to pay attention to this and the round your game is currently in. 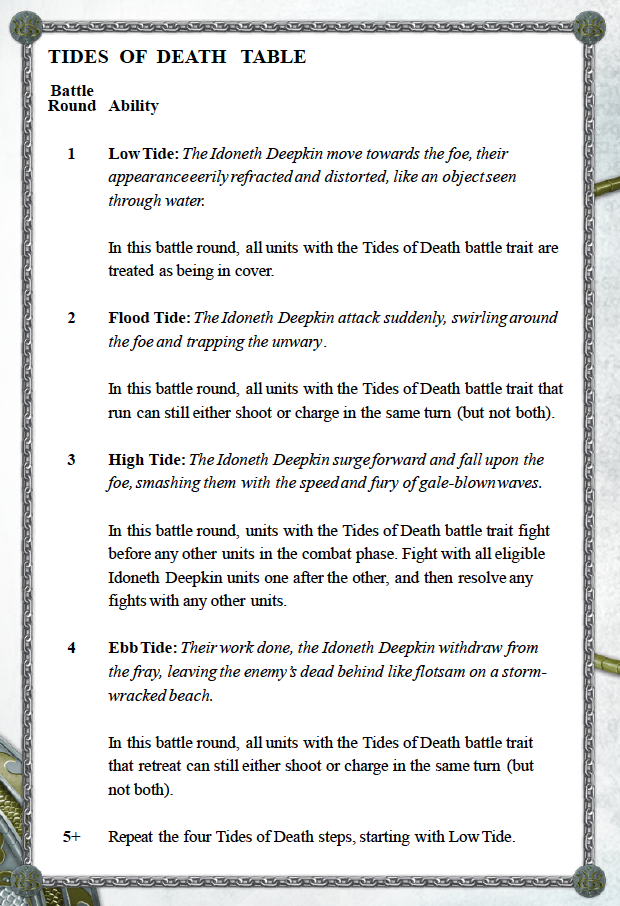 You’ll want to play this army in phases. In the first round you’ll want to hang back and secure position. Cap what points you can, but don’t overextend yourself. In round 2 you’ll want to see if there’s anything you can pick off, but again don’t overextend. Round 3 is the round to push, this is when the majority of your abilities take effect especially High Tide as all of your units will fight first in the combat phase. Round 4 will be for mop-up, and round 5 will be to finish things off. You’ll probably start behind in the game from an objective perspective, but with a little luck and clever planning you’ll have your opponent sweating as the tide slowly shifts in your favor. 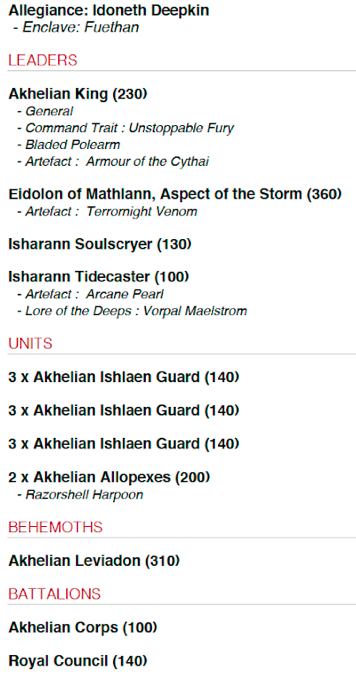