They can take our stacking saves, but they’ll never take our freeeeedom!

This weeks list is all about dominating the board with a few super-tough units while you slowly erode your opponents army. Like a creeping disease, Nurgle is here! Although the Mortal side of the army took a small hit with the loss of multiple ‘shrug’ saves per unit (see our video if you don’t know what I’m talking about), the demon side is just as gnarly as ever. 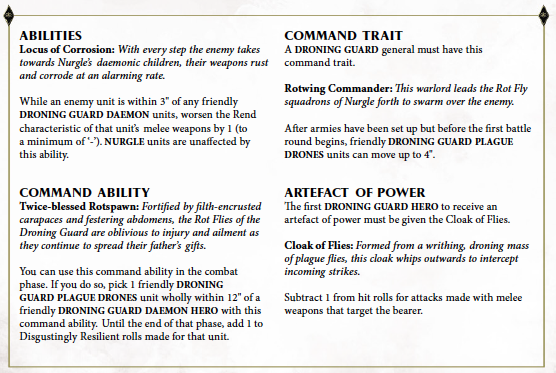 Arguably the most important part of this list is the addition of the Host of the Drowning Guard, which lets you tack on even more Nurgle goodness to your demon troops, for free! It provides a few nice bonuses, most specifically reducing an enemy’s rend by 1, and getting to scoot an extra 4″ after deployment. It may not sound like much, but this list is all about adding up a bunch of small bonuses, and the biggest one of these is adding +1 to Disgustingly Resilient rolls. Sure, we may not be able to stack multiple shrugs anymore, but being able to save a wound or mortal wound on a 4+ is pretty nice.

Slaves to Darkness Demon Prince – When you’ve got a bunch of fast-moving demon units that need a hero nearby, the Demon Prince is your best choice. With a move of 12″ he won’t have any trouble keeping up with your flies, which means he’ll more likely be able to trigger the command ability more often. Not only does he ignore the first point of rend, your opponent also subtracts 1 from attack rolls in melee against him, AND he fights first in combat.

Spoilpox Scrivener, Herald of Nurgle – Solely a support character, you’ll want to keep him nestled up close to one of the units of Plaguebearers to give them a way to reroll hits of 1. Thankfully, he only needs to be within 7″ to make this happen, so you can keep him safer near the end of the tar pit.

Poxbringer, Herald of Nurgle – His signature spell technically has unlimited range, but the real reason you’ve got this fellow is to control the board through Glorious Afflictions. Don’t forget that his In Death There is Life ability lets you restore 1 wound to any Nurgle Demon unit within 7″, so he can target himself, one of the other heroes, or just put a wound back on a Plague Drone. 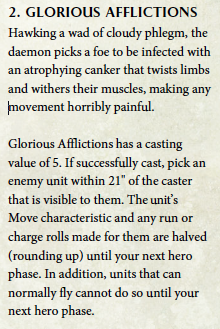 Epidemius, Tallyman of Nurgle – Saddled with one of the worst sculpts out there and generally forgotten by the community, Epidemius is the secret to the whole list…assuming he stays alive. At the beginning of each of your Hero Phases, he looks to see how many models have been slain total by friendly Nurgle units. With no range, you can hide him as far away from the fight as possible and let the bonuses slowly build. And as a Nurgle hero, he’s a little tougher than most, so even if your opponent targets him first it’ll take a little work to drop him.

Plague Drones – The main force of this list, you’ll want to get these guys into combat as soon as possible. They’ll lock down big units easily, and can be surprisingly deadly if you roll well. However, their main goal isn’t to kill as much as it is to fall down slowly, as aided by the rest of the list.

Plaguebearers – Difficult to shoot and even harder to slog through, these two big units let you swamp as much of the board as possible. Sure, they hit like wet noodles, but when you control all the points on the board, who cares?

Chaos Warriors – It’s always bugged me (no pun intended) that the Plague Drones are not battle line. Which meant this list needed a battle line option for 100 points, just perfect for a little group of Chaos Warriors. We’ve gone with shields this time around, as the name of the game is endurance. Note that these dudes don’t benefit from most of the boosts in the list, so they’ll probably end up blocking for Epidemius or babysitting a point. 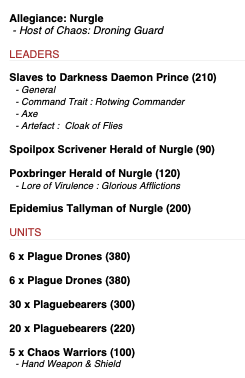