For this week, we are going to take a look at one of the more recently updated factions: Ogor Mawtribes. With a specific focus on the Beastclaw raiders tribe. If you are wanting a list that will both strike awe and thin out your friends list, then this is for you.

Ever since I started playing Age of Sigmar I have always wanted to play an army comprised of nothing other than huge monstrous creatures. Thankfully, with the new battletome, it seems I can finally fulfill my dream, and hopefully yours as well! I wouldn’t look to run this list in any tournament; however, it would be tons of fun on some casual pickup games at your local game store.

Honestly, no battalion or tribe is really needed for this list to do what it needs to. I will quickly discuss an option, if you would want to take a tribe.

Boulderhead Mawtribe- This is probably the best option in terms of tribe for this list. The passive abilities give every monster (everything on the list) on this list +1 to the wound characteristic, and allows every stonehorn/thundertusk hero to take a mount trait instead of only 1.

The command ability is also not half bad. You can use it at the start of ANY phase, to pick one Hero that is part of the tribe to use the top row on its damage table. This on its own could potentially give your 1 wound stonehorn one last chance to really tear something up before finally falling down.

The command trait is nothing to write home about, +1 movement only if the unit is wholly within 12 inches of the general. Is it completely useless? No. However, it just doesn’t fit well with this particular list.

The biggest reason I would not take this tribe is the artifact. Not that it is bad, +1 to hit on the mount’s melee weapons is pretty good. It would make the stonehorn a lot more reliable in dealing massive amounts of damage. In this list, however, the main point of the stonehorn is to act as a tank for your thundertusks.

Frostlord on Stonehorn – Oh boy, let’s give this chunky boy a look over. 13 wounds with a 3+ save? Yes please. But now let’s throw on that Ethereal Amulet and say goodbye to all those pesky rend units. We arn’t done though, the Stone Skeleton ability give him a +5 invulnerability save. Making this lad very hard to get wounds one. Oh, he did take some damage? Well don’t fret, the Skilled Rider trait will let him half the number of wounds (rounding up) when using his damage table. For the mount trait I default to Black Clatterhorn to add one to hit for his already potent Rock-Hard Horns attack, however, pretty much all of the mount traits are good for him. If you are fighting a Nighthaunt army, I seriously suggest taking Metalcruncher. At the start of the combat phase it lets you pick one enemy warmachine or unit with a save characteristic of 4+/3+/2+ within 3 inches and just straight up do d6 mortal wounds to it. And with almost every Nighthaunt unit having a 4+ save, that means the entire army is in a lot of trouble.

Huskard on Thundertusk– These guys are going to act as your main support to keep your Frostlord in the game for longer. First things first, the weapon choice. You have an option between the; Harpoon Launcher, Chaintrap, and Blood Vulture. In my opinion, the Blood Vulture is the best choice. In the shooting phase you pick an enemy unit within 30 inches and on a 2+ it deals 1 mortal wound. The biggest point of this unit other than the Frost-wreathed Ice attack (I will cover that more later) is the prayers. The two biggest prayers you can use are; Winter’s Endurance (Heal d3 wounds) and Pulverizing Hailstorm (Does good damage if there are a few enemy units bunched up). Use the heal to keep your Frostlord topped off and in the fight, and throw down the Pulverizing Hailstorm when the right moment comes up. All prayers go off on a 4+, however, for every friendly Thundertusk within 18 inches, you can add +1 to the roll. If you keep the Huskards in range of each other and potentially one of the lesser Thundertusks, you will be able to reliably get off your prayers.

Thundertusk Beastriders – These guys are basically less cool versions of the Huskards. Again, I suggest taking the Blood Vulture, but at least with the, you also have the Harpoon Launcher for more chances at some ranged damage. They will have a decent number of wounds at 12 with a 4+ save. Also, melee weapons that target them have a –1 to hit, which is always nice. The big thing is the Frost-wreathed Ice. At full health they will roll 12 dice, and if the unit the target has more than 20, you will need to roll a 4+ instead of a 6+ or 5+ for a unit of 10 or more. With every successful roll doing 1 mortal wound. Very useful for whittling down some blobs of chaff slowing down your Stonehorn. And with 5 Thundertusks in your army able to use it, hordes will go down to manageable levels very quickly.

Okay, I am about to throw down to top level, MLG strats here. Take out your phone, open up your favorite music streaming app, and turn on some instrumental Viking death metal. Then, your Stonehorn, you push it forward. Trying to get to the juiciest targets you can. Your huskards, you keep floating around the middle to throw out support. Use your Beastriders to contest objectives and screen for the Huskards.

Seriously though, there isn’t much strategy going one with this list. But this list is also not competitive in any way. Don’t be afraid to let your Beastrider’s get involved in some melee fights, they can hold their own more than you think. Do you best to control objectives, and don’t forget that every unit in this list counts as 10 models when it comes to determining control of an objective. And your Frostlord can count as 20 for certain battleplans. 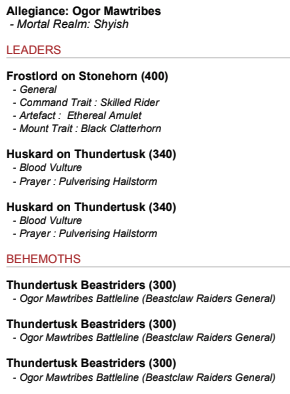