Whelp, since ATC is a little up in the air as is every other AoS tournament for the foreseeable future, thanks global pandemic, I figure I could share with you what I was planning for ATC. As the Order player in our group, I’ll talk a little about the strategy behind the list. Whether it would actually work or not is an entirely different question. 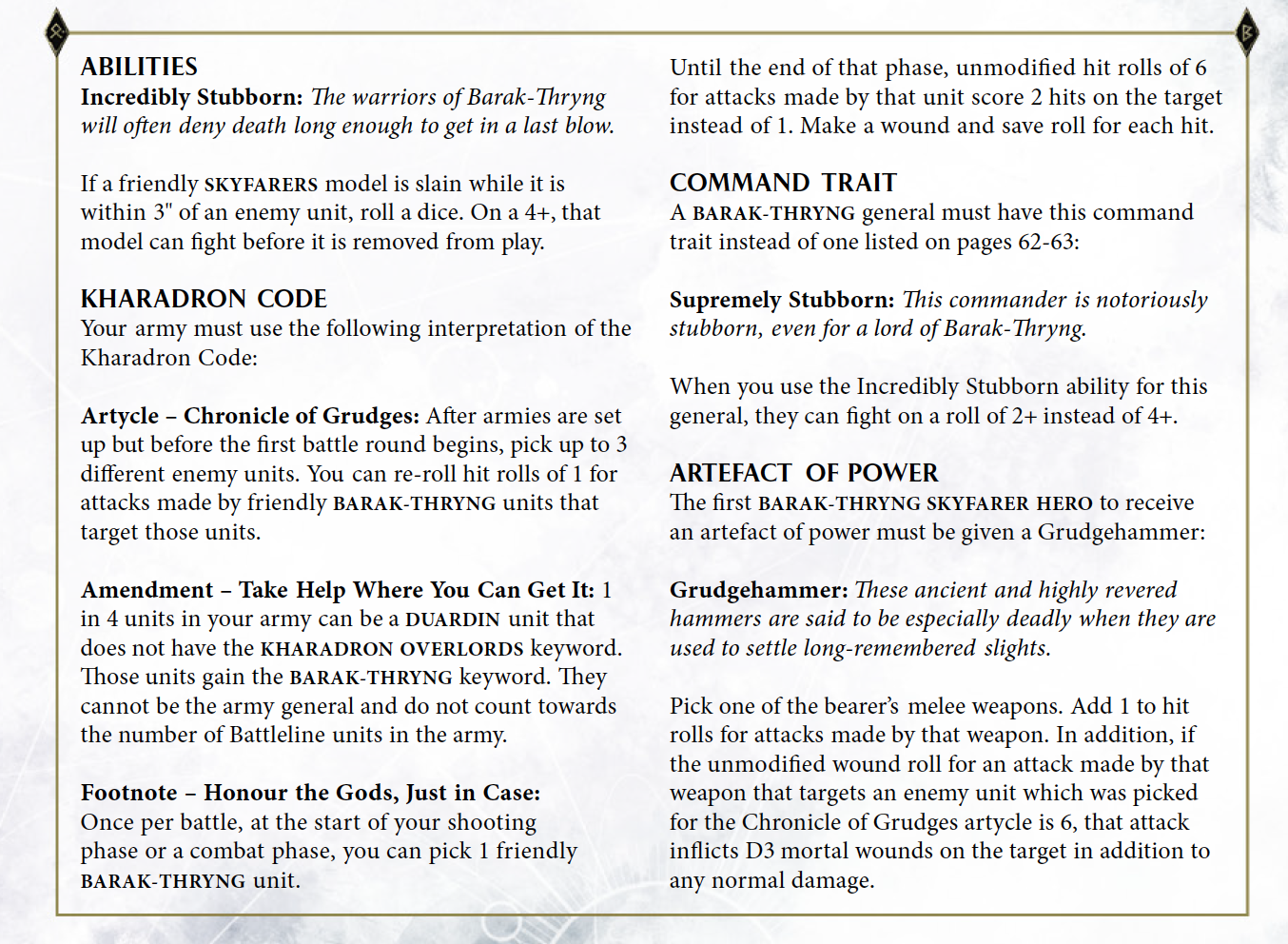 Ok two reasons to utilize this code, Article of Grudges and Honour the Gods, Just in Case. The rerolling ones to hit for three units of your opponent’s army is super helpful in taking down heroes or lynchpin units. This list is aimed at taking as many of your opponent’s weapons off the table as quickly and efficiently as possible. Getting the rerolls will help us accomplish that. Honour the Gods, Just in Case is a little more of a crapshoot. We aren’t running a big block of guys in this army so there’s less utility of this Footnote, but could swing a big in a tight situation. I’d advise using it early on either the larger unit of Endrinriggers or the Ironclad.

We’re grabbing the Iron Sky Command mostly because we want fewer drops, and the additional artefact and endrinwork. This will come in handy later. Not having to take battleshock tests wholly within 18” of the Ironclad should cover most of the board for us as well and since we have so few units we hopefully won’t lose any due to cowardice because that would not be thematically appropriate.

Endrinmaster with Dirigble Suit
This guy is our general because we need him to make our Endrinriggers battleline for this army. He’s a solid hero with several different shooting attacks of various ranges, hits decently well in melee combat, especially once we stick the Grudgehammer artefact on him. But most importantly of all he will heal 3 wounds that are allocated to a skyvessel he is within 1” of during the hero phase. Hitch him and the double-sized unit of Endrinriggers with the Ironclad and let them all fly around together as one ballistic force.

Aetheric Navigator
We need a little bit of anti-magic in this army and he’s bringing the unbind/dispel to the table. He’ll also slow down an opponent’s flying unit which could be the difference between being in melee combat or not. The answer is to not be in melee combat.

Aether-Khemist
The Aether-Khemist’s abilities are solid, but not as useful since they can’t be done inside the safety of a skyvessel. That’s ok though because we have a trick! Remember when we grabbed that extra artefact? Here’s where we stick it with Spell in a Bottle. And what spell did we put in there, why the Everblaze Comet of course which once deployed is an auto-cast and can’t be unbound. Drop that bomb right in the center of your opponent’s army and let it wreak absolute havok. For bonus damage, go second during turn one so it deals additional damage in-between rounds that your opponent can’t escape from. It’s like getting a nice shot of splash damage so you can see who you’ll be able to pick off during your upcoming shooting phase. 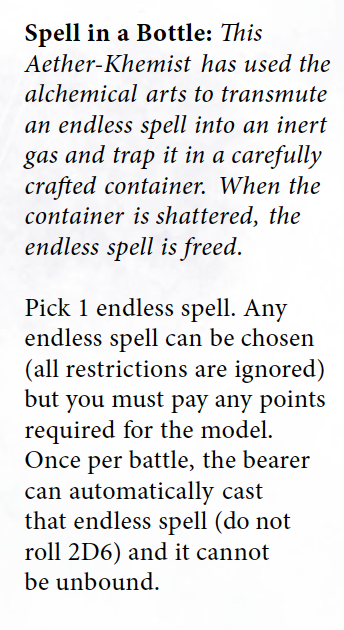 Lord-Arcanum on Celestial Dracoline (Ally)
The one unbind probably isn’t enough and we need another spellcaster hero but preferably one that can get around the board. Hello Lord-Arcanum! He’ll have a bunch of neat tricks to scurry around the board, cap objectives and just be a general nuisance and since he’s a stormcast wizard he’s also a little heartier and won’t get decimated by an errant pack of chum units. Bonus, he can also recast the Everblaze Comet if it gets dispelled because Stormcast. Who needs friends when you have meteor showers?

Ironclad
Honestly, the lynchpin of your army. This thing is going to pump out damage on a consistent basis because of its multiple shooting attacks and it’s such a big target it’s near impossible to ignore. Its most effective range is within 12” and since Fly High allows us to redeploy to outside of 9” from an enemy unit we can get right into range to deliver significant damage. In addition, one of our two great endrinworks will end up here and I typically advise the Last Word which will have us fire off the big gun at the end of an enemy charge phase if they are within 3” of this model.

Grundstok Gunhauler
This is our utility ship and you’ll need to decide in advance how you’ll want to operate this guy. If you put it next to the Ironclad, the Ironclad can shrug wounds on a 6. Alternatively, since we’re plugging the other great endrinwork here with Coalbeard’s Collapsible Compartments, you could stick one Aetheric Navigator or Aether-Khemist in here to run them across the table to cap an objective. It’s match-up dependent but may swing a game under the right circumstances.

Arkanaut Company
Ok not ideal but we need them to fill a battleline and a battalion so consider this a tax for all the other stuff you’ll be doing. Garrison them in the Ironclad if you want some additional firepower or drop them on an objective and let them hang out. They probably won’t win you a game but they might make it so you don’t lose one.

Endrinriggers
Decent firepower and the potential to heal some wounds on either of the skyvessels. Put the pack of six with the Ironclad and the pack of three with the Gunhauler. You’re essentially operating two clumps of units around the table and since they can all hitch to the skyvessels you don’t have to worry as much about them being left out in the open. Against melee armies the ships can provide a valuable screen so they don’t get picked off. 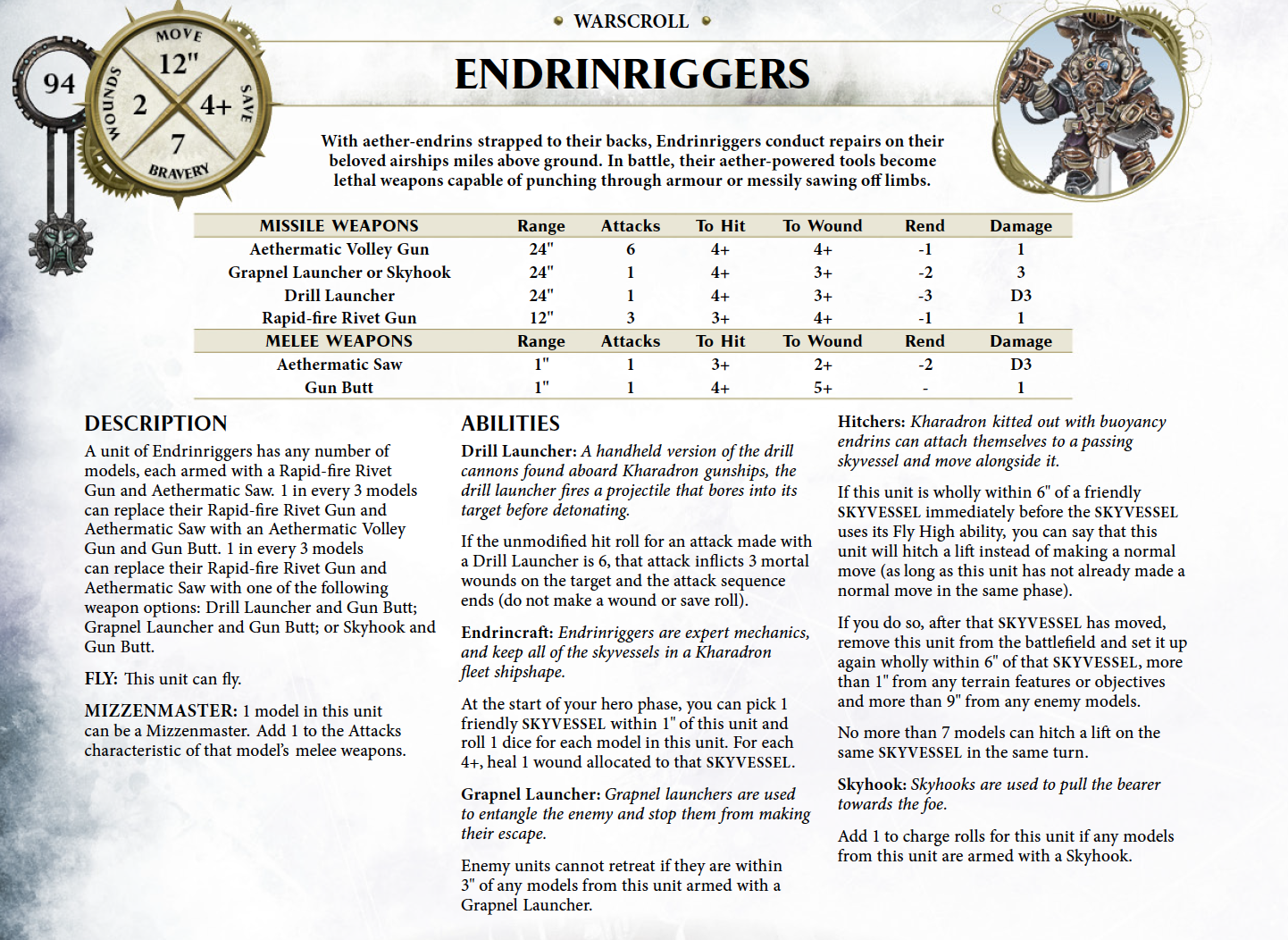 Prosecutors with Stormcall Javelins (Ally)
We have an extra 90 points and if we brought some more Arkanaut Company that would slow the Ironclad down. Instead ally in some Prosecutors for their speed and range on the javelins. Another unit that can move quickly to an objective to cap it once the way is clear.

Stick and move, stick and move. Think of this army like a technical boxer. It doesn’t have the one-punch knockout power but over time you’ll slowly start to wear down your opponent until they have nothing left in the tank. If by turn three you see them starting to panic a little because their turns are getting shorter and shorter, and you still have most of your army on the table you should feel pretty comfortable knowing you can swing the fight. You just can’t leave it too long and fall so far behind on objectives you can’t pull it back. It’ll take a little bit of math and a little bit of strategy, but boy does it feel good when the plan comes together.