Megadeath songs aside (though possibly the anthem of orruk warclans?) our list of the week is a fun and competitive Ironsunz Ironjawz Orruk Warclans list.

One of the best parts of running ironjawz is that all of your base units also count as battleline and they’re also really good. No battleline tax required in this army, which also lets us build around some pretty unique battalions and fill them up with meaty, destructive units. 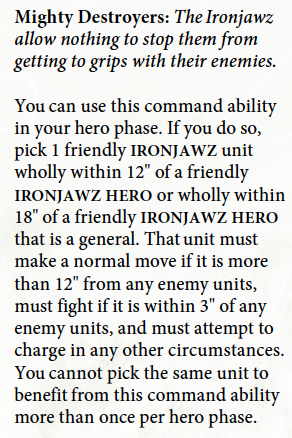 With the ironfist battalion the leader (in this case our brute boss) gets to utilize a command ability reserved for heroes for free! Depending on your opponent’s distance, you can move, charge or fight in the hero phase giving you an extra round to position or hopefully put a hurting on your opponent.

Megaboss on Maw-Krusha – The big beast is going to chew up a lot of the points in this 2K list, but with a profile like his (8/3+/3+/-1/2 plus the mount profile of */3+/3+/-2/2) and all the goodies we’ve stacked him with you can feel pretty confident he’ll put a hurting on whatever you point him towards.

And what are those goodies you ask? Oh, just a simple -1 to hit in the first full round thanks to the Ironsunz Warclan (that’s army-wide by the by) and an excellent artefect that worsens the rend of attacks targeting him by 1. This’ll help keep him at his full profile for longer, which will also give you more chances to keep making him stronger with Strength from Victory.

Orruk Weidnob Shaman – Here’s where things get tricky. We already have all this extra movement and attacks going with our army, but what if we could just have orruks show up somewhere else on the battlefield? That’s right, we got teleporting orruks with Da Great Big Green Hand of Gork. And since we have an extra artefact lying around why don’t we put a Shamanic Skullcape on our guy here so we take that casting value of a 7 down to a 6.

Wurrgog Prophet – Wait a second?! A Wurrgog Prophet isn’t from Ironjawz! How very observant of you, I like to sneak this Bonesplitterz guy in here for two very specific reasons. One, we’re sort of bad at magic stuff so having someone with two unbinds per round is handy when your opponent is bringing silly magic stuff. And two, he can generate an extra command point in the hero phase on a 4+ which lets us do more of the running and smashing we like.

Ardboyz – Teleport these guys! A block of 20 is 40 wounds for your opponent to chew through and with the Waaagh! Drummer providing the +2 to charge rolls, you’ll only need to roll a 5 to get them into combat after you blinked them across the battlefield.

Brutes – Point these guys at anything with a wound characteristic of 4+, they get +1 to hit when they fight those guys. They hit hard and are great for taking our opposing heroes. 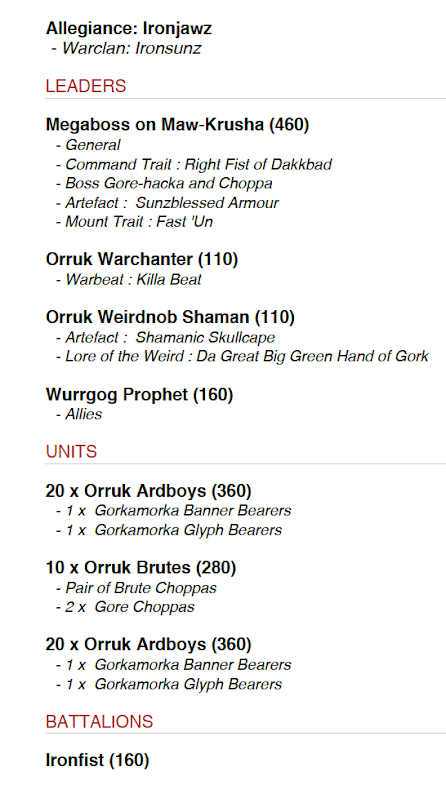