Do you like dinosaurs? Did you watch that part in Jurassic Park where all those dinosaurs flocked a certain way? Would you have liked it more if they were all carrying spears? Then do we have a list for you! 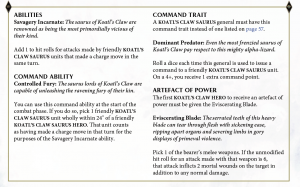 Ok bear with me here because there’s a couple things we’ll need to follow for this all to work and make sense. Starting with Coalesced there’s three things we pick up here: +1 attack of the Jaws weapons (Predatory Fighters), -1 damage inflicted by successful attacks on Coalesced unit to a minimum of 1 (Scaly Skin), and also we ignore bravery modifiers (Cold-blooded).

Then on the Koatl’s Claw portion we get +1 to hit rolls for attacks if the Saurus unit made a charge in the same turn (Savagery Incarnate), and the command ability enables you to pick a friendly Saurus unit and treat it as if it had made charge for the purposes of the previous ability (Controlled Fury). 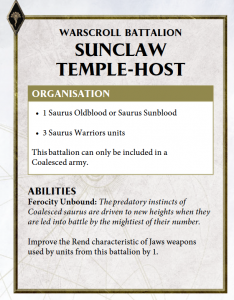 Saurus Oldblood on Carnosaur
This guy is pretty disgusting just by himself. Decent shooting attack, a variety of melee attacks that can pump out some serious damage when it gets into combat, but what we care about more than anything else on this guy is his command ability where you pick 1 friendly Saurus unit in the combat phase and until the end of that phase you can add 1 to hit rolls for attacks made by that unit (it cannot benefit from this command ability more than once per phase). Let’s put a pin in that for second and come back to it in the next section.

And of course, because it also meets the Saurus keyword the Koatl’s Claw +1 to hit applies to this big dino as well. Because this will also be our general he’ll take the Dominant Predator Command Trait and Eviscerating Blade Artefact of Power. The latter of which is neat bonus, but the prior could be devastating for your opponent because every command to a friendly Koatl’s Claw Saurus unit on a 4+ you receive 1 extra command point essentially replacing the one you just used.

Saurus Warriors
Ok so why does all of the above do exactly? Well let’s take a look: 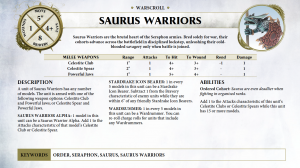 What we’d typically be looking at 81 attacks with the spears (since we add one to the attacks characteristic of the Celestite Spear when there’s more than 15 models in the unit) hitting on 4s, wounding on 3s. And then 40 attacks with the Powerful Jaws hitting on 5s wounding on 4s. But with a successful charge, which you get to reroll as long as there is a drummer in the unit, and Wrath of the Seraphon also command ability also taking effect we’re now looking at the following:

It’s a whole bucket of dice and if each unit is successful on the charge and the Saurus Oldblood on Carnosaur is positioned correctly you could theoretically do this for each unit as long as you have the command points to go with it, which you might do because of his command trait for being the general. That’s (… does math …) 483 attacks from three units of 40 dinos. And they have a 4+ save with a Bravery of 8 that can’t be modified. You’ll also lessen damage by 1, so unless your opponent is also bringing a bucket of dice from a bunch of models they are going to die very slowly. Good luck taking an objective from these dinos!

Skink Oracle on Troglodon (Hero)
Is that a wizard on a dinosaur I see?! Yea we’re throwing one of these in here to help counter some magic and it has some serious staying power at 12 wounds and 4+ save. With massive blocks of Saurus Warriors running the front lines, this guy will have the opportunity to run the edges, cast spells, and pick off anything that is trying to escape the bulk of your force.

Skink Starseer (Hero)
And let’s add in another skink wizard for good measure. I might even garrison this guy in the Realmshaper Engine if it’s on your side of the table for the extra shot at mortal wounds. Otherwise this guy is here for spellcasting and objective holding.

Saurus Knights (Unit)
Finishing off this army is a double-sized unit of Saurus Knights. Which also have the Saurus keyword so there’s some fun bonuses they’ll get as well. Which is why we’ll want to run them with the spears because all the bonuses will occur on the charge, +1 to hit and then +1 damage (from their warscroll). Another good unit to run on the edges of the table to pick off a hero or tie up a unit.

Absolute utter chaos. Board coverage is probably your best friend with this particular army. You won’t hit as hard on return swings when your opponent engages first, but because you’ll likely die a little slower you should still be ok even if the charges don’t go your way. You’re playing a horde army with some staying power and the bucket of dice method. It’s a fun, chaotic, shove models forward kind of army, but you probably won’t need to worry about accidently losing the game due to objectives either. 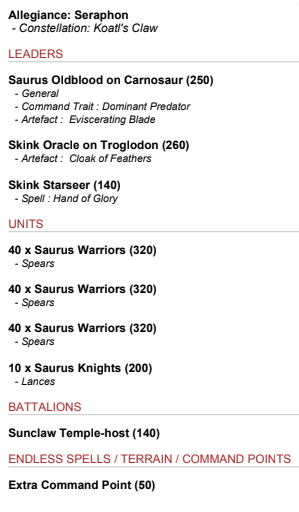