Dinosaurs are cool and all, but you know what else is cool?

Ok, lets get this out of the way up front: this is a list built for fun narrative games, and even though it does have a few nice tricks, you’ll probably never be able to take it to any top tables. Why? Because we’ve crammed as many dragon(ish) units as possible in here! 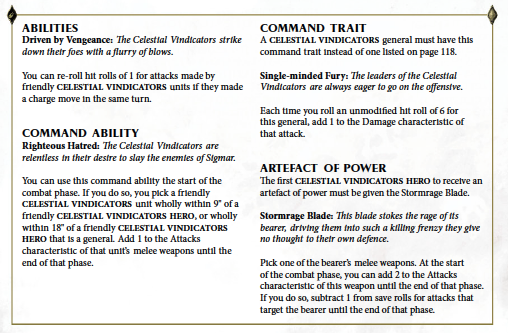 For this list, we’ve taken the Celestial Vindicators chamber. While this list can function just as well without a chamber, the Vindicators do play nicely to the theme. You’ll be wanting to charge in your Dracoth units as much as possible, and combining re-rolling ones with +1 attack will ensure they do enough damage to really shock the opponent. The command trait is a bit of a throwaway, but thats par for the course in Stormcast chambers, and it might throw an extra wound out here and there.

We’ve gone with the slightly more expensive Stardrake option here for a few reasons. Firstly, this gives the Stardrake a re-rolling saves of 1 ability, and if the save is successful, each enemy unit within 3″ suffers a mortal wound. Not only does this keep the big guy around in a list thats already very low model count, but it also keeps your opponent wary of which units are nearby when they select a unit to attack. Second, his command ability lets ALL of your units (well, except those plucky Liberators) re-roll wound rolls for their mounts. Plus, he’s a giant dragon that can flat out devour up to three models a turn, removing those pesky banner bearers and netters.

The surprise hit of this list. Your opponent will probably be focusing on the GIANT DRAGON thrashing around the table, but this little guy is where the real explosive damage can come from. On a charge, with the command ability and activating his artifact, you’ll be getting 6+D3 attacks at a 3+/2+/-1/D3. Thats a potential of 27 wounds, just from the hammer! If you’re having to play defensively, his command ability will grant battleshock immunity in a 24″ bubble, and he has the same shield as the Stardrake version for bouncing wounds back. On top of all of that, he still has the older version of the Dracoth shooting attack, allowing you to pick a point within 12″ and roll a dice for every enemy unit within 2″. He does benefit from Look Out Sir!, so keep him near his Dracoth buddies for maximum survivability.

Battleline tax because for some reason you can’t have a Dracoth only army. Maybe in the next Stormcast book? These little groups are good for dropping on objectives while your opponent deals with the giant wave of dragons bearing down on them.

Obviously, this is the big focus of the list. Without any buffs, a unit of 4 Concussors is still a force to be reckoned with. They bring a 3+, re-rolling ones save, and at 5 wounds each, they’ll stick around long enough to really deal out some sustained damage. Between the shooting, lightning hammers, and mounts, each unit of four can easily take down bigger, more elite units. For hordes, be sure to utilize the Blast to Ashes ability as much as possible, and as long as you keep then within range of the general’s command ability, you should have no problem dealing out some electric-type hits.

This list doesn’t include a battalion, but at 7 drops you might get to determine the first turn anyway. If not, you’re Stormcast! Keep half your army hidden in space to avoid first-turn charges, sacrificing a unit of Liberators if you have to. After that, drop your super-elite calvary down, lightning blast out the hero and support units, and charge right in. With a little luck, your initial attack will be so devastating your opponent will have nothing left but scraps. 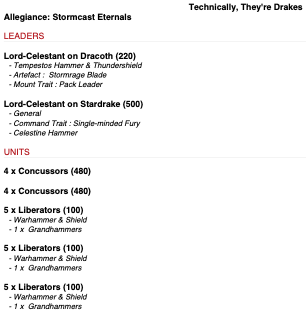